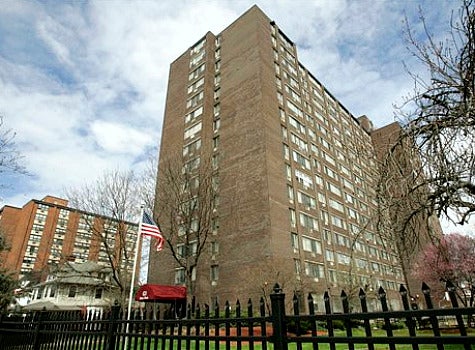 Most 7-year-old children spent this weekend hunting for Easter eggs and eating candy, but for a little girl of that age from Trenton, NJ, her weekend was spent healing from a savage gang rape. All eyes were on her hometown, Trenton, where five males were arrested, making headlines for the brutal gang-bang styled rape of a child three years shy of her tenth birthday. In addition, the men, Gregory Joseph Leary, 20, Timear Lewis, 19, and three underage boys (the youngest is 13), have all been arrested and charged with aggravated sexual assault and child endangerment, but are not the only parties at fault. News broke that the assaulted 7-year-old little girl was “pimped” by her 15-year-old step sister, when the teen offered to let the men touch the girl at a sex-for-money party held in an apartment in Rowan Towers (pictured). Initially worried about the well-being of her older sister, the little one tagged along for the trip, not knowing the “touching” would turn into forcible entry when the men threatened to take the 7-year-old’s life. The police have assured the public that more people were involved in the March 28th sex party, and that future arrests will be made. However, the community residents are living by the “snitches get stitches” motto, and are slow to come forward with more info. Just when you thought the world couldn’t get more asinine, news like this leaves your jaws dropped and eyes popped. No sense in asking that annoying question asked so many times in these situations, “Where were the parents?” Obviously, they were nowhere to be found. However, this story is so disheartening and deplorable, finding who was to blame doesn’t matter nearly as much as ensuring that justice will be served for each disgusting man involved. Although the morality of the whole situation leaves us shell-shocked, I find it hard to accept how harshly the 15-year-old involved is being treated by the media. Her label as a “pimp,” “monster,” and “devil” feel extreme, when I’m sure the 15-year-old didn’t dream up this party on her own. It wasn’t a party that she spent months planning, but one that occurred to provide money for some that seriosuly needed it. This 15-year-old is a product of her environment. Although older and more responsible for her actions, remember she still is in fact a child, and was raised in a way that, sadly, has allowed this to happen. Life for all 15-year-old girls isn’t Chris Brown crushes and lip-gloss shopping. Some teens are lost little girls forced to be mothers to their siblings. Some girls have been abused so consistently as children that sex becomes an addictive hobby or skilled occupation before they are able to discover their self-worth. So, instead they discover the worth of the dollar bill. And, in some circumstances, they will do whatever they have to do to get it. Pointing a finger at a 15-year-girl doesn’t solve anything when most of us know already the love of money is the root of all evil. Slick Rick said it best: “This type of sh*t happens every day.” Many stories like this go unreported, and when this particular news cycle dies down, incidents similar to this will continue to happen. Not to say it’s right, but we all saw the movie “Precious,” in which author Sapphire and director Lee Daniels shed a harsh light on the perversion that takes place in destitute living environments. Touched by her stepfather at the age of three, Mo’nique and Gabby Sidibie brought many of us to tears telling Precious’ story. So, while a traumatized nation watches this particular incident unfold with a turned-up lip and raised nose, it is pointless to shake your head if no effort is made to change what some underprivileged communities around the nation consider to be the inevitable. Instead of falling out in shock, ask whether or not anything is being done collectively or individually to change how our young boys and girls–especially those that lack parental guidance–are being cared for. What are you doing to shape their minds and thoughts, so that, instead of being products of their environment, they can grow up to be adults that positively affect and change their community? What are you doing besides chiming in after the fact? Calling a 15-year-old with a life harder than you’ll ever imagine names, making her the villain, doesn’t solve the problem. It just shifts the blame–and our communities will stay doomed. Read more: