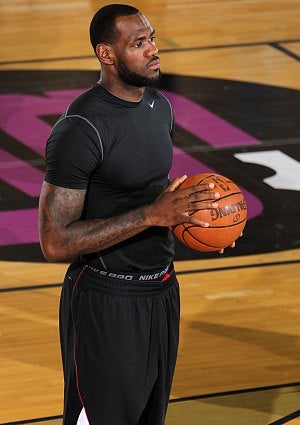 Basketball fans are on the edge of their seats waiting to see what team Lebron James will pick. Just to stir things up, Diddy tweeted, “Lebron signs with the Knicks! …I’m only joking! … He’s going to Miami!” James will announce his next move from the Boys & Girls Club in Greenwich, Conn. tonight. Catch it on ESPN. [NYDN] And a 55-year-old man claims that he is Lebron James’ father and slapped his alleged son with a lawsuit. Leicester Bryce Stovell says he tried to prove that he was James’ father, but the NBA star and his mother Gloria tampered with the evidence. [TMZ] “Glee,” starring Amber Riley, was nominated for 19 Emmy Awards! [People] Kim Kardashian is on her mogul game. The Socialite turned entrepreneur announced that she’s releasing her second perfume in February 2011. [TF] A new 3-D technology allows dentists to show their patients exactly what their teeth will look like after braces. [NYT] Zoe Saldana is coming to a billboard near you. Calvin Klein recently unveiled a steamy underwear ad campaign starring Saldana. [People] Thirty-One female employees of ‘The Daily Show’ signed a letter claiming that “Jon Stewart is not a sexist,” however, no Black women put their John Hancock on the statement. Interesting. [LATimes] Facebook is fast becoming the world’s online social network of choice. [NYT] This is your brain. This is your brain on exercise. [NYT] Want to keep your friends and family updated on every step of your pregnancy? There’s an app for that. [EH]