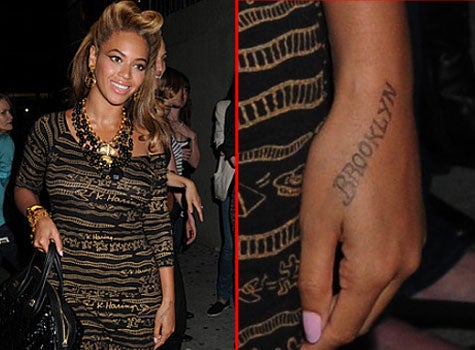 Is Beyoncé representing hard for her man Jay-Z? It seems the pop superstar got “BROOKLYN” — where her husband is from — tattooed on her left hand. What do you think? Is it real? Nick Cannon gave his wife, Mariah Carey, a sweet anniversary gift — a custom-made “Ring Pop” white diamond and pink sapphire ring from Jason of Beverly Hills jewelers. Our teeth are aching just looking at all that bling. [People] Former White House Social Secretary Desiree Rogers told Bloomberg Businessweek, “I will be fine. I’m not crying for me.” [Huffington Post] Former civil rights campaigner and NY state labor official G. Douglas Pugh passed away on Wednesday at age 86. After receiving an MBA from Colombia Business School in 1957, Pugh fought against racial discrimination in the work force at the Urban League of New York. Pugh went on to be the director of labor relations and urban affairs for the state Dormitory Authority and also co-edited the book, “Black Economic Development.” [NYTimes] “The Boondocks” made its return to TV last night with an episode that dissects the Black community’s support for President Obama. Did you watch it? What did you think? [Examiner] Plus, Beyoncé transforms herself into “BB Homemaker” — a sexy version of “Rosie the Riveter,” donning a red polka dot headscarf, short shorts, thigh-highs and pumps as she tries to change a tire — for the preview of her upcoming “Why Don’t You Love Me” video.