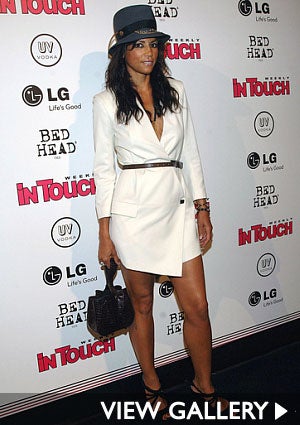 Growing up on the East side of Detroit, Veronica Webb took a special interest in clothes. Even before her phenomenal rise to the top of the modeling world, Webb took great pride in how she presented herself. She may have been wearing clothes sewn by her mother but she treated them with as delicate a hand as one would couture gowns. Webb, who broke barriers by becoming the first African-American model to land an exclusive contract with a major cosmetic company, Revlon, in 1992, possessed an understanding of style versus fashion early. Looking stylish had little to do with brand names but lots to do with confidence, and Webb has plenty of that. While she would eventually collect an arsenal of designer duds over the years as a top model, Webb continued to apply the same amount of care and thought  into everything in her closet, from her sweats to her one-of-kind pieces. And it showed. “She can have on jogging pants for an informal lunch and yet she will have the little touch of chic that will make it stand out,” says designer and friend Sophie Theallet. Webb, who has graced the covers of countless magazines and served as a muse for designers like Karl Lagerfeld and Azzedine Alaia, doesn’t have a signature look on the red carpet. That’s too safe for Webb, who loves to shake things up. When everyone expected her to be just another pretty face with a short shelf-life, Webb surprised the naysayers by parlaying her modeling fame into a number of opportunities that included being a TV host, a journalist, actress and author. Titles are irrelevant when it comes to Webb’s creative spirit and the same applies to her style. The mother of two can as easily steal the spotlight in an elaborate gown as she can in a conservative shift, a sexy metallic mini-dress or a whimsical gingham frock. Her eclectic closet has something to please every woman. Take a look at why we love Veronica Webb… Read more: