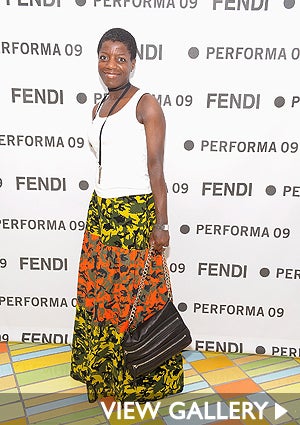 Director and Chief Curator of The Studio Museum in Harlem, Thelma Golden is equally revered for her keen eye for emerging artists as she is for her lively sartorial vision. Golden spent the bulk of her career as a curator at the Whitney Museum of American Art, which made her a fixture on the cosmopolitan contemporary art scene. Jet-setting around the globe in the name of art calls for an eclectic wardrobe for every season. Golden has been quoted as saying that if she didn’t work in the arts, she’d love to work for Oprah. We think the fashion world would make a better fit. The art aficionado utilizes her diminutive frame as a walking canvas to create her own masterpieces with her collection of designer pieces. Golden frequently turns to interesting details, shapes, prints and patterns to add depth to her looks. Her uncompromising style mirrors her approach to her work: detailed, youthful and unconventional. Golden’s fashion flair hasn’t gone unnoticed. The curator has been at the forefront of the New York social scene for years, and we’ve come to expect nothing short of fabulous when it comes to her ensemble. Add to the equation that she is married to one of the fashion industry’s great talents, Duro Olowu, who is known for his love of bold prints, and we have a match made in heaven. Golden’s other go-to designers include Tracey Reese and Alaia. Golden’s 16-foot closet space in her Brooklyn, New York, home is not only packed with sensational pieces, but her shoe collection isn’t too shabby either. Boxes of Prada and Sigerson Morrison line the walk-in, making us salivate.   Take a look at curator extraordinaire Thelma Golden’s spectacularly curated wardrobe.