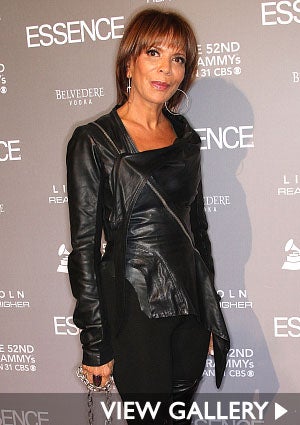 Motown Records president and all around music biz hot-shot Sylvia Rhone has always defied sartorial conventions. Before becoming the first Black woman to serve as the vice-president of a major label, Atlantic, in 1988, the economics major’s off-the-beaten-path fashion choices would single her out at the bank where she was working. Instead of conforming to the corporate dress code of professional skirt and heels, Rhone choose to wear pants one day and subsequently raised some eyebrows. She’d eventually leave finance behind to pursue her dream of working in the music industry and wearing whatever she damn-well pleased.  An eclectic and youthful soul, Rhone’s style has always skewed towards the avant-garde. Rhone is a fashion rebel that doesn’t abide by the archaic blueprint of what an older, successful woman should look like. Don’t expect to catch her in a stuffy gray skirt suit. Rhone is more comfortable rocking it out in leather pants and knee high boots–all in head-to-toe black. She experiments with edgy looks without coming across like she’s trying too hard. Perhaps, that’s because Rhone’s personal style isn’t an attempt at looking young or trendy. It has always been obvious that her style was all her own. While Rhone often gravitates towards dark and subversive designs, she’s also known to dabble in cutting-edge bohemian looks in earthy tones. Draped leather jackets cut to fit like second skin are in a constant rotation in her closet. So are platform boots, wedges, hot bags and not to mention great jewelry. We’re convinced Rhone’s closet is one to envy. Take a look for yourself… Read more: