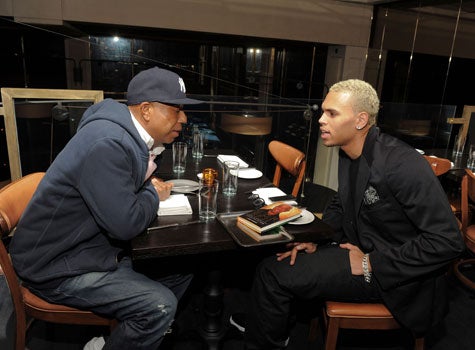 Chris Brown’s “Look at Me Now” single may be number one on Billboard’s R&B/hip-hop chart, but everyone would rather discuss the singer and dancer’s most recent outburst backstage at ABC’s “Good Morning America.” Music industry vet Russell Simmons is coming to Chris’ defense, saying Chris is dealing with the downside of young fame and that he deserves a break.

“Chris is suffering from the same thing [that] almost every young star has gone through, including the DIsney kids,” Simmons wrote on GlobalGrind.com. “And having lost control, some of these young artists, sometimes, do an unspeakable thing at a moment of time. And they pay the price. But as I and my team have said repeatedly on my site GlobalGrind.com, what’s not fair is artists paying the price of the sins in their young lives for the rest of their lives. Again, and again, and again.”

Simmons is probably referring to Disney stars like Miley Cyrus and Lindsay Lohan, who have recently made headlines for underage partying, bouts in rehab and more.

“I’m just saying, give this man a break. I spoke to him last night for a long time and I know how good of a young man he is,” Simmons wrote. “He’s having the same type of struggles that all those other Disney kids have and all the other people who have instant fame… And because of that one regretful incident, no one will give him a break.”