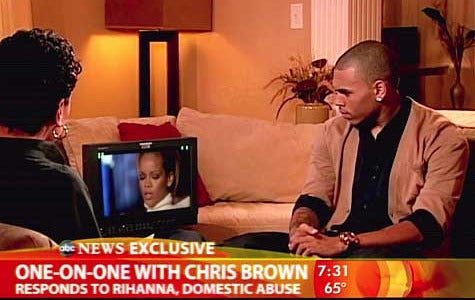 Ohhhhh Chris. If you happened to miss Chris Brown on ABC’s “20/20” last night, no worries he told us absolutely everything…he’s told us before. Last night many tuned in at 10 EST to witness for the “first time” Chris Brown’s exclusive reactionary commentary to Rihanna’s earlier “20/20” appearance, in which she discussed in detail the night that changed both their lives. However, instead of Chris giving viewers a more detailed insight to Rihanna’s comments or the night of the assault, he opted to give his already-used, poorly-rehearsed, media-trained responses.

It’s not upsetting that Chris doesn’t seem to want to open up about the incident, because he has every right to keep it private. But after coverage on CNN, MTV, BET, FOX and radio, it just becomes publically tiresome that he continues to accept interviews under the pretense that more will be explained, and he doesn’t deliver.

In the short edited 15 minute interview that was shown, Chris however did mention that Rihanna may have fibbed a bit in her interview with Diane Sawyer last month. When ABC’s Robin Roberts asked Chris if he thought Rihanna has listened to his single “Changed Man,” he responded quickly and very adamantly, “I played the song for her a month after I did it, and she cried when she first heard it. I’m not trying to call her a liar, but she heard it,” Chris admitted.

After a ton of domestic violence facts and figures, footage and details most have already seen and heard, and a oddly placed premiere of one C. Breezy’s newest videos, it’s safe to say his “20/20” interview was far from exclusive. And while we may have discovered Rihanna altered a detail or two, the public has to appreciate that unlike a Chris Brown interview, at least there are actually details.