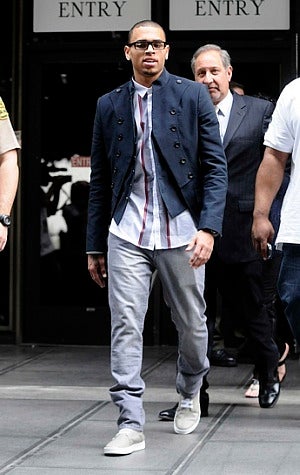 Chris Brown has remained in the public eye ever since his infamous attack on Rihanna in February 2009. He’s been out partying, attending basketball games and fashion shows, and he even performed for the Saving OurSelves benefit concert for Haiti on BET. However, it seems the industry still has its back turned on him. Brown’s recent singles “Crawl” and “I Can Transform Ya” are not getting much radio play; his album sales were lackluster compared to his previous release. Ticket sales to his “Fan Appreciation Tour” last year were disappointingly low. Now, Breezy, who in the past has been vocal about being snubbed, is asking his fans for help. “I ain’t never really did this, but right now I need all of my fans’ help. Some radio stations aren’t playing my records,” he said in a voice message on social networking site SayNow. “They are not being that supportive, and I wouldn’t expect them to. It’s on the fans, and you guys do what’s in your power to bring me back. That’s all I need is you guys, and nothing else will do that except for the fans.” “I don’t know what else to say. It’s nothing else that I can do. I’m doing everything that I need to do. I’m doing me as a person and I’m a better guy. It’s on ya’ll. My singing and my music, I do it for you guys and everything else, but it won’t be possible if I’m not relevant on the radio and it wouldn’t be possible for me to be an artist if I don’t have any support from the people giving artists an outlet. I can’t be an underground mixtape artist. That’s where we are. I just want all my fans to help me. I love ya’ll. Peace” Brown’s plea is a different approach from the Twitter rant he went on back in December about retailers, “blackballing [his] CD.” “The industry can kiss my ass,” he wrote. Some fans have not been sympathetic to Breezy’s plight. “He should see by now that the music industry is done with him and they will not support anything of his again,” ESSENCE.com user Tamara commented in response to Brown’s Twitter vent. Brown later closed that Twitter account.  Still Chris does appear to have some dedicated fans in his corner. Comments on ESSENCE.com frequently reflect user support for the singer/dancer. “Congrats on the new CD…I’m luvin it already!! Much love & blessings to you this year Chris …Baton Rouge still has mad love for ya,” a commenter named Deborah wrote under a recent photo of Brown. “Chris looks great, continue to hold your head up high despite the negative comments…” another commenter, Dee Dee, wrote. Despite these pockets of support, Chris’s efforts to fully resurrect his young superstar status in the past year have not been super successful. Right after the domestic violence incident, radio stations around the country began pulling his songs off of their playlists and currently none of his singles from “Graffiti” are represented in Billboard’s top 50 hip hop and R&B songs. If the changed public opinions of entertainers like Ike Turner and Mike Tyson are any indication of what Chris faces on his road to reinvention, it seems he’s got a lot of work to do to get back into America’s heart. However, the 20-year-old does have youth and a repentant attitude on his side. Read More: