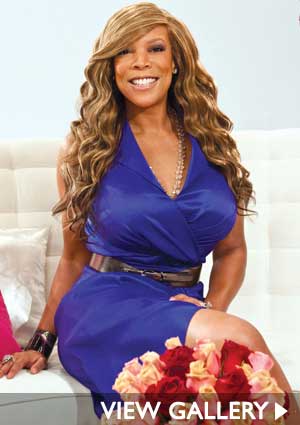 Looks like things are about to get even hotter in the Chris Brown/Rihanna war of words. Tomorrow Breezy will be making a special appearance on Wendy Williams’ syndicated gabfest, ostensibly to debut the video for his new single “Crawl,” from his upcoming album Graffiti. But we know the deal: Mister Can’t-Keep-My-Hands-to-Myself is likely to use his time on Wendy’s couch as a clumsy comeback to Rihanna’s gripping appearance on ’20/20′ last week, in which the singer said that while Brown beat her he looked like he had no soul. What makes the whole spectacle even more bizarre is that only months ago, in September, Brown and Williams were engaged in a beef of their own.
Allegedly, Brown used his twitter account (he goes by the name Mechanical Dummy) to post a snide comment about Wendy looking like a man. On her show, Wendy fired back with “Well, you know what? At least if I was a man I would spend my time bullying other men, perhaps, and not other women!”
Perhaps the best line of the feud goes to JessiKaRabiit83 who posted on Perez Hilton’s catty celebrity blog, “Wendy Williams is more of a man than Chris Brown will ever be.” Meee to the owww! To tune into Wendy’s show, check your local listing for time and channel.
On a side note: Rihanna will also be premiering her music video for ‘Russian Roulette’ tonight on ABC’s ’20/20′.