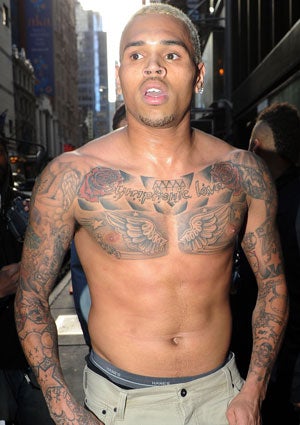 Chris Brown lost it backstage at “Good Morning America” this morning, allegedly breaking a window and walking shirtless out of the Times Square studio. According to TMZ, Brown’s rage was linked to questions about the domestic violence incident with Rihanna during an on-air interview by Robin Roberts…

Roberts questioned Brown about legal issues stemming from the two-year-old incident, to which he responded, “it’s not really a big deal to me,” trying to redirect the interview to his album F.A.M.E., which dropped today.

Afterward, Brown apparently stomped off to his dressing room screaming and allegedly smashed the window with a chair. While no one in the studio saw him break the glass, sources say he was in the dressing room when it smashed. Brown left the building with his shirt off.

TMZ also reported that Brown tweeted, “I’m so over people bringing this past s**t up! Yet we praise Charlie sheen and other celebs for their bulls**t,” and then deleted it.

He replaced it with, “All my fans — this album is for you and only you! I’m so tired of everyone else!! Honestly!! I love team Breezy!”

Robyn Roberts told TMZ that Brown approved her questions about the Rihanna incident and added, “I’m pulling for the guy.”