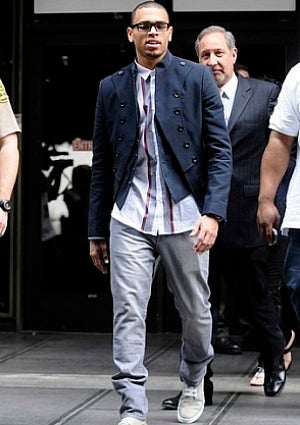 Chris Brown recently engaged in a Twitter feud where he spewed some homophobic words and hateful insults at former B2K group member Raz-B. The Twitfight started after Raz-B shared his thoughts on R&B singers who abuse women, tweeting, “Im just sittin here thinking how can n**gas like [Eric Benet] and [Chris Brown] disrespect women as Intelligent as Halle Berry, Rihanna.” Chris Brown immediately lashed back, writing, “n**ga you want attention! Grow up n**ga!!! Dick in da booty ass lil boy.” Brown’s low-blow was a reference to allegations Raz-B made years ago in which he claims he was molested by his band’s male manager. The argument only escalated with Raz-B accusing Brown of being a closeted homosexual and the two taking virtual jabs at each other’s careers. Here’s a snippet of the drama: Raz-B: @Chrisbrown Do you hit your boyfriend @andre_merritt like you do your women? ChrisBrown: Tell me this @razb2k!! Why when the money was coming in u won’t complaining about getting butplugged! #homothug!!! Raz-B: @chrisbrown I luv how u resort 2 disrespectful low brow tactics when u clearly sabotaged ur own career by beating women! After all was said and done, Brown wrote: “BTW… i love all my gay fans and this immature act is not targeted at you!!!! love” Brown recently posted a photo online of his diploma from a court-ordered anger management program but after today’s rant, we can only wonder, did it really work? What are your thoughts on Chris Brown’s rant —  surprising or not?