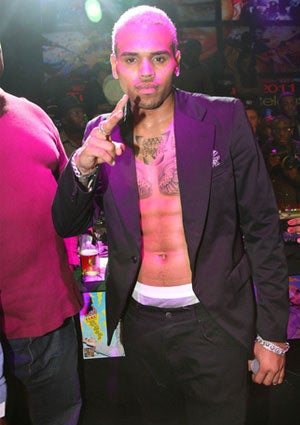 I’ve always had a soft-spot for Chris Brown. Coming up, he had one of those smiles that was made to break hearts and escape trouble. And though, he’s morphed from bright-eyed, cherub-cheeked child into a strapping, chiseled jaw and tatted up man, still, there’s something about him that tugs at my heart-strings even when there are compelling reasons why he shouldn’t.

There’s a part of me that still sees Brown the way my mother did the first time he landed on her radar. We’d gone to the movies to see “This Christmas”— twice. She liked the “singing light skinned boy.” So did I, which is why I’d dragged her to see the film the first time. We were walking out of the movie theatre after the second viewing and she observed out loud, “you know, he’s cute and carries a note. If he could dance…” I laughed and later, showed her the YouTube video of Brown’s performance at the 2007 MTV Awards, the one where he jumps from one table to the next as part of his energetic routine.  ”He’s almost as good as Michael,” Mum observed, offering perhaps the highest compliment someone actually raised on The Jackson Five can give any other dancer. She called my father to the computer and made him watch too. “Boy’s got a talent you don’t see too much these days,” Dad observed, stating the obvious.

Post Rihanna-gate, post-Twitter meltdown (replete with homophobic slurs) and most recently post Tuesday morning’s anger-addled break from civil society when something deep within Brown suggested that throwing a chair at a Good Morning America window was a brilliant idea, it’s occurred to me that Brown isn’t the only one who needs to get a grip. So do I. And too, anybody else who excuses, downplays, or supports his repeated show-no-act right behavior be it with #TeamBreezy hashtags on Twitter or album downloads on iTunes. Yes, he’s uber-talented and no, he’s never made a bad album. But that isn’t reason to keep giving him a pass for acting a fool over and over. And over.

Brown’s blow ups are officially more pattern than coincidence or adolescent indiscretion of which he doesn’t understand the full consequence. He brutally beat his girlfriend in 2009 and before her battered face could heal, he hopped on a jet ski.  Two years, one anger-management certification (proudly displayed on Twitter), and a teary breakdown midway thru a performance of “Man in the Mirror” on the 2010 BET Awards, he has a tantrum because he’s angry GMA interviewer Robin Roberts asked him soft ball questions about one of the most defining moments of his career. Then he goes on a date with his new girl, followed up by a pick up ball game at the Cage? Ummm…. dude? Do you not realize, yet again, the seriousness of what you’ve done?

Brown almost lost it all once before when his last album went wood, radios wouldn’t play his music and he, one of the few dancers that can do MJ justice, didn’t perform at the 2009 BET tribute because of his own actions.  And here he goes again.  His repetition of the same mistakes and the continued non- awareness for the magnitude of the fires he ignites, lets me know Breezy’s only going to get worse before he, if he, ever gets better.  Why should he change? This week, he’s is on course to 250,000 copies of his ironically titled new album, F.A.M.E, ie, Forgiving All My Enemies.

Since clearly, his camp is not getting through to him, it’s up to the consumers to send the message they won’t or can’t. As Brown goes through the machine-like motions of promoting his latest product, I need him to know it’s not the journalists bringing up “past sh—”, the Rihanna stans on Twitter, or the people “still” mad about him beating her up bloody who are causing his troubles, much less in need his forgiveness. By far, Brown’s biggest enemy is, as the elders would say, his own self.

Yes, he said “sorry” (again) 106 & Park on Wednesday. But, uh, I’m not accepting it. This is the latest in a line of inarticulate apologies from him over the same issue. And even with so much practice, I’m not convinced he was sorry, just that he got caught. Again. When I was a kid and messed up, my parents accepted the first apology. If I did the same thing again, I got a blank stare and terse, “how about you not be sorry and you just don’t do it?” It’s about time we all sent that message to Brown.

Demetria Lucas is the Relationship Editor at ESSENCE Magazine and the author of A Belle in Brooklyn: the Go to Girl for Advice on Single Living. Follow her on Twitter: @abelleinbk