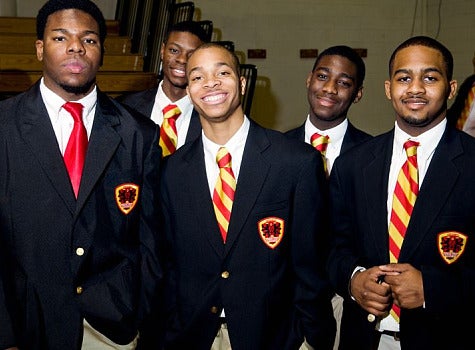 All 107 students in the first graduating class of Chicago high school Urban Prep are heading to college. Founded in 2006, the all-male, all-African-American charter school in Englewood that emphasizes a uniform of embroidered blazers and ties, set out to improve its students odds of getting in to college and getting ahead. “There were those who told me that you can’t defy the data,” Tim King, founder and CEO of school told Chicago Tribune. “Black boys are killed. Black boys drop out of high school. Black boys go to jail. Black boys don’t go to college. Black boys don’t graduate from college. They were wrong.” To celebrate the achievements of the Class of 2010, Chicago’s Mayor Richard Daley and the city schools chief Ron Huberman surprised the student body at their Friday morning assembly meeting, where school officials told the class that they would be rewarded with a free prom. When the senior class started high school, only four percent of them could read at grade level. Now they are all off to 72 schools–including Howard University, Rutgers University, University of Illinois and DePaul University–around the country. “I’m them,” the school’s director Kenneth Hutchinson–who hails from the inner-city Chicago neighborhood where Urban Prep is based–told the Tribune. “Being accepted to college is the first step to changing their lives and their communities.” Read More: