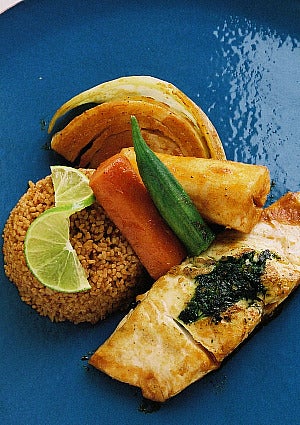 Pictured: Thiebou Jenn, a roasted blue fish dish, is the national dish of Senegal Senegalese-born chef, Pierre Thiam is slowly trying to change the way you think about African food. His restaurant Le Grand Dakar serves a vibrant fusion of African food influenced by cuisine from around the world (like Portuguese, French and Vietnamese) and is easily one of the trendiest spots in Brooklyn. His cookbook “Yolele! Recipes from the Heart of Senegal” recently received a Jury Award at the Paris Gourmand World Cookbook Awards, which recognizes the world’s best cookbooks. Chef Pierre spoke with ESSENCE.com about how to discover this delightful cuisine and shares one of his favorite recipes. ESSENCE.com: How would you describe the cuisine you serve at your restaurant? CHEF PIERRE THIAM: Contemporary West African cuisine. ESSENCE.com: What would you like people to know about West African cuisine? CHEF PIERRE: That it’s a cuisine that has been evolving over thousands of years, and like every cuisine, contemporary West African has influences from other cultures it encountered during its history. For instance, France brought some of its culinary heritage during their 500 years colonial history in Senegal and vice-versa. Africans influenced Southern American Cuisine, particularly in Louisiana (ingredients like okra or black-eyed peas are originally from West Africa). People should also know that traditional West African Cuisine is healthy. We use grains like fonio, millet, and sorghum, which are far healthier than the common grains used in the western cuisine. ESSENCE.com: Say someone is ready to try African food. What’s your advice to them? CHEF PIERRE: You have to be open-minded and understand that the African approach to food and presentation is different. We traditionally eat around a bowl, some people use their hands, others use a spoon. Also, the flavors can be intense because of the way we cook. We use fermented ingredients, much like Southeast Asian cuisine, which brings another level of taste and flavor. The Japanese call it umami, which means “good taste.” ESSENCE.com: What are some easy-to-get key ingredients in West African cuisine? CHEF PIERRE: Many ingredients are surprisingly the same as those you’d find in Western cuisine, like okra, cassava and plantain, which you can find at a local supermarket. ESSENCE.com: Are there any simple recipes for an (introductory) West African dish that you can share? CHEF PIERRE: I love the simplicity of a banana plantain baked in its skin in a hot oven until soft. It’s great with a spicy sauce or for breakfast with maple syrup. CHEF PIERRE’S SALATU NIEBE (Black-eyed Pea Salad) Originally from West Africa, black-eyed peas are an excellent source of calcium, folate and vitamin A.   pound cooked black-eyed peas 1 tomato, peeled, and diced 1 cucumber, seeded, and diced 1 red bell pepper, diced 1 bunch scallions bunch Italian parsley, roughly chopped 2 limes 1 cup olive oil 1 chile Salt and pepper Yield: Serves 8 In a bowl, mix the tomato, cucumber, bell pepper, chopped scallion, lime juice, chile, salt and pepper. Gradually pour in the oil while whisking. Pour the dressing over the black-eyed peas, folding gently. Allow to sit for one hour. Serve nestled onto lettuce leaves. Chef Pierre Thiam is the author of Yolele! Recipes From the Heart of Senegal. Read More: