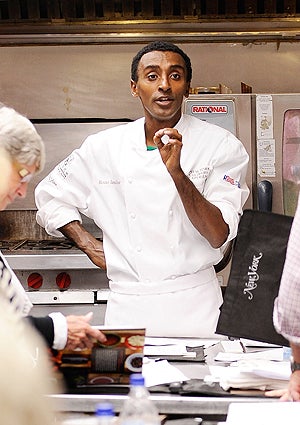 Ethiopian-born and Sweden-bred Chef Marcus Sameulsson is cooking with gas. Last week he released his latest cook book “The New American Table,” which contains 300 recipes–a remix of his culinary inspirations from around this country.
Samuelsson has brought the rock star appeal, swagger and brand-building best practices of  Jay-Z, Beyonce and LeBron James to food, cooking and restaurants. He’s has three classic cook books (including “The Soul of a New Cuisine”), he’s chef and co-owner of Aquavit restaurants (New York, Stockholm and Tokyo) and has had his own TV show “Inner Chef” on the Discovery Home channel. The camera-ready chef, who is married to model Gate (Maya) Haile, also has a gracious and giving personality that people gravitate toward.
Sameulssons also has great timing. His movement dove tails perfectly with what is going on in popular culture in the age of President Obama. Samuelsson represents the new global perspective on lifestyle. He’s African but raised in Europe, so he understands multiculturalism. Samuelsson brings those influences to his cooking and philosophy. He also promotes healthy ingredients which relates to First Lady Michelle Obama’s organic vegetables and healthy eating initiatives.

Cooking is becoming more and more sexy thanks to reality shows like Bravo’s “Top Chef” and the success of personalities like Rachel Ray, Emiril Lagasse, Paula Dean, the Neelys and others. Samuelsson is poised to be one of the next superstars in the food and lifestyle category. Now that is what’s called heating it up.