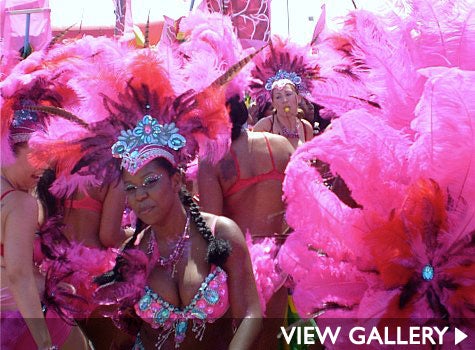 If you’ve ever thought about visiting Toronto in the summer, now you have a reason. Transport yourself to just about any Caribbean island during the second half of July for what is considered the biggest festival in North America. The bright colors and infectious energy of the Caribbean were out at this year’s Caribana Parade, which celebrated its 43rd year. Hot girls and even hotter guys ventured into town for two weeks of celebration, but most people joined the fun in the last few days, when everyday folks were transformed into celebrities and big shots became anonymous revelers. More than a million people from around the world were lured to Toronto’s downtown area on Saturday, July 31. The music was pumping and the people were inviting, making folks wish they could throw off their clothes, slip on a bedazzled bra-top, don a feathered headpiece and start jumping up as part of the show. It was my first time visiting Toronto, but it definitely won’t be my last. Here’s a look at this year’s spectacular event.