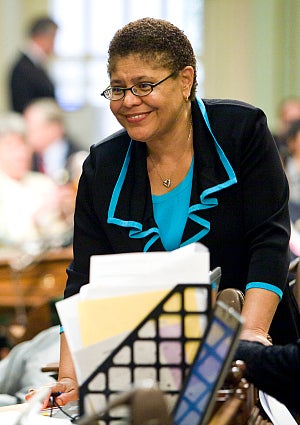 California Assembly Speaker Karen Bass says that the Senate Democrats’ seat loss last week is just a “bump in the road.” When Karen Bass, Speaker of the California Assembly, arranged to visit Washington, D.C. with Governor Arnold Schwarzenegger last week, the plan was to talk about working together to lower her state’s $20 billion budget, job creation, and the healthcare bill. It ended up being the same week, however, that Republican Scott Brown won the Massachusetts Senate race, taking away Senate Democrats’ vital 60-seat majority. While prevailing Washington wisdom says the loss is a major blow to President Obama’s healthcare and jobs bills, Speaker Bass insists that much of the hand wringing is overblown. ESSENCE.com caught up with Bass, California’s second most powerful politico, about struggling to team up with Republicans, what Democrats are doing now to get healthcare passed, and why she believes, even after the Democratic loss in the Senate, the President’s agenda is going to be okay. ESSENCE.COM: You met with Congressional leaders about working together around budget deficits and unemployment in your state. But Governor Schwarzenegger has also blasted the White House and Congress as being responsible for California’s deficit. So, how did those meetings go? ASSEMBLY SPEAKER KAREN BASS: The meetings went very well. The governor made harsh statements in his State of the State Address before he came, but in the meetings his tone was much better, and the leadership was much more receptive. We agreed to work together on the jobs bill moving forward that can hopefully bring California 700 million additional dollars. One of the things that House Speaker Nancy Pelosi asked of the governor, and the other legislative leaders, was for their help in contacting Republicans from California and getting them to vote for things. She made the point very clearly–what they have been able to get done for California, they did so on a partisan basis without help from Republicans. She wants them to make phone calls and get some Republican votes. ESSENCE.COM: You also came to Washington to express California’s support for national healthcare reform. With Republican Scott Brown’s election to the Massachusetts Senate seat, what do you think is going to happen to the bill now? BASS: I was expressing a difference from the Governor, who recently said he didn’t support the bill. The governor might believe that the state is opposed to the healthcare plan, and so might the Republicans, but as Assembly Speaker I get contacted from all over the state. People are very concerned about healthcare reform and want to see it happen. The people I hear from want to see more happen, not less. But even with the Democrats losing a Senate seat, I think it’s actually going to be okay. It put a bump in the road, and it might be delayed, but I do believe it will still happen. ESSENCE.COM: So you don’t think this is the “end of the Obama presidency” that so many are talking about? BASS: No, I don’t. I think it signals a bump in the road. Sometimes when that happens you have to take a step back in order to move forward, but the word I heard from the legislative leadership is that they’re looking at a variety of different scenarios now. I don’t think that means they’re going to water it down, or that they’re not going to do it. They’re just looking at different scenarios to get it done. To read Cynthia Gordy’s Obama Watch blog, click here.