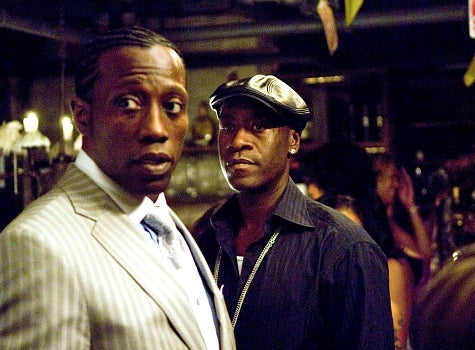 Dear Hollywood, your story lines about inner-city drug dealers are tired. For my generation you’ve done it with Nino Brown (“New Jack City”), Bishop (“Juice”), Frank Lucas (“American Gangster”) and now with Casanova “Caz” Phillips in “Brooklyn’s Finest.” All these characters are cookie-cutter predictable: drug lords who get rich or die tryin’, often at the detriment of their family and community. Thanks to endless hood films, rappers and documentaries that portray drug dealers as masters of the universe, we’ve become acquainted to the exploits of the likes of Nicky “Mr Untouchable” Barnes, Kenneth “Supreme” McGriff, Howard “Pappy” Mason–the list is endless–all heroes that our Black men are somehow supposed to identify with. All dope dealers turned street legends. I know what you’ll say, Hollywood, the Black crime flick is about what’s “real” in the hood. It’s about living by the code of the streets and working with the cards you’re dealt. But guess what, I’m not buying it anymore. This can’t be all there is to the reality of the hood. Of course, this conversation with Hollywood took place in my head as I sat watching “Brooklyn’s Finest.” Despite my gripes with the flick, I knew the streets would love it, if only for it’s familiarity. And they did. It grossed $13.5 million at the box office this weekend. I couldn’t help thinking how the reception to recent Black films like “Precious” and “Good Hair,” wasn’t so warm (both movies made about a $1.8 million on their opening weekend). Granted, movies are a matter of taste so not everyone is expected to want to see a movie about an abused Black girl who triumphs or have any interest in where hair weaves come from. Don’t get me wrong, I get the allure of the Black gangster. For some, hustlers are a symbol of how to throw a middle finger up at a dominant White culture and still make paper. Lots and lots of it. At least that’s the attitude Notorious B.I.G. affected in the classic “Brooklyn’s Finest,” for which the movie is based. “F**k three wishes/ made my road to riches,” he rhymed. I fully comprehend and respect the “create your own path to wealth” part of the message. It’s the methods of attaining it, as advocated by Biggie and covertly glorified in “Brooklyn’s Finest,” that I find problematic. I’m always amazed by how the Black drug dealer character continually seems to lack feeling or a willingness to subject himself to self-analysis, thereby never taking in the effect his drug trade is having on the community. It’s no different for Caz in “Brooklyn’s Finest.” The message again: Get Yours, regardless of the consequences. No disrespect to the directorial skills of Antoine Fuqua or the fine acting of Wesley Snipes and Don Cheadle, but the longer Hollywood keeps presenting this image, the less we question it’s authenticity and begin to internalize it as fact. At the risk of sounding like Debbie Downer, isn’t it time Hollywood rethinks the urban Black male character and start showing that all types of power brokers can come out of the inner city? Especially since we now have a Black president who spent a large portion of his adult life working and cultivating his leadership skills in the inner city? I’m just saying. Read More: