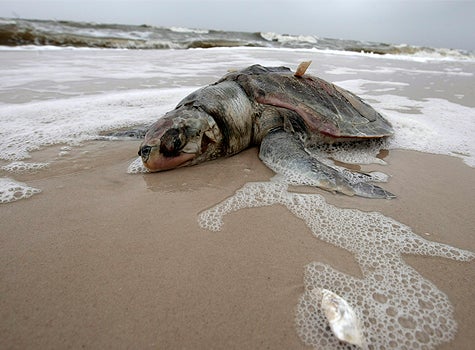 Here are some undisputed facts of this mess that BP created in the Gulf: 1. BP’s Deepwater Horizon oil rig exploded and sunk on April 20, 2010 killing 11 workers setting off the largest oil spill on record; 2. BP estimates that the per day leakage is ONLY 5,000-7,000 barrels per day; 3. Non-BP officials estimate the rig leaks 12,000-19,000 barrels of oil per day; 4. As of June 3, 45 days since the explosion, 34 million barrels have leaked covering 30,000 square miles; Nearly 40 percent of the Gulf’s fishing area is closed due to the spill; to wit BP’s Randy Prescott, VP East Power Origination, flippantly declared that “Louisiana isn’t the only place that has shrimp.” Hmmm… Such a comment is an insensitive slap in the face to the millions of Americans in the Gulf whose lives are irretrievably broken due to BP’s mismanagement of the spill. Mr. Prescott’s remark also smacks of indifference for our US waters that the British company is polluting. To date, BP has tried and failed miserably to control the spill. Let me count the ways: we have 6 failed attempts to date. BP waited nearly 2 weeks before its first try at controlling the oil leak when it attempted to install an underwater shutoff valve, obviously that didn’t work. BP’s next shot failed when they tried to install a containment dome (top hat) over the leak but did not take into consideration the ice crystals that would form on the cap by lowering the dome 5,000 feet underwater rendering it useless. All those BP scientists didn’t think of that beforehand? Any scuba diver knows it’s pretty darn cold down there, and that’s only 130 feet underwater. The second, smaller top hat BP tried a few days later simply missed the mark, and is sitting on the ocean floor. Next up, there’s BP’s junk shot effort, where they tried to plug the hole literally with junk: golf balls and tire scraps, which also failed. Maybe it’s just me, but no surprise there. Last week, BP tried a top kill maneuver, which attempts to plug the hole by forcing debris and mud into the opening. This too failed when the underwater pressure of the well blew the debris straight out of the hole! I can only assume that BP executives don’t watch their own underwater cam which clearly shows (at least in my opinion) the sheer force of the oil spewing out that well? As of the moment I am writing this, it looks like the Lower Marine Riser Package (LMRP) may be a bust as well because the diamond saw blade got stuck in metal as they were cutting a piece of the riser pipe to fit a piece of a cap (top hat) over the pipe. BP is thinking they should give the top hat another try with this LMRP. I’m thinking BP should give others a try. On Tuesday, the federal government assembled a group of 20 scientists and engineers to discuss solutions, and invited James Cameron of “Titanic” and “Avatar” fame to join the roundtable. The Fed’s reason: Cameron’s many years of experience with underwater cameras and deep sea robotics could contribute to the brainstorming containment efforts. BP’s reaction: no thank you! Cameron called the BP execs who turned down his help “morons.” I couldn’t agree with him more.