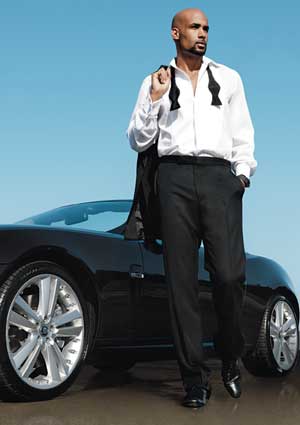 Count Boris Kodjoe’s double life as a spy and husband on NBC’s “Undercovers” and primetime has never looked so sexy. ESSENCE magazine covered Kodjoe for its “Men @ Work” feature in the October issue. Take a look at what he has to say about his new role. STATS: 37, married to actress Nicole Ari Parker and father of Sophie, 5, and Nicolas, 4 PRIMETIME POSITION: He insists his current role–a multilingual, well-traveled spy on nbc’s “Undercovers” –is the closest to who he really is. Well, except for the espionage part, of course. “Steven is an ex-CIA spy and a loving husband,” Kodjoe says, “but after five years of ‘regular life,’ he’s ready to go back in.” (Psssst–his Mrs. is a spy, too). NATIVE TONGUE: He has mastered English, spanish and French, yet German still comes first. “At home I speak German to my kids and nicole is learning, too,” Kodjoe notes of his first language, which tends to slip when he’s feeling fatigued. “once, we were shooting a scene and [executive producer] J.J. Abrams said, ‘that was great; now let’s do it again–in english!'” ROLE OF A LIFETIME: “I’ve always wanted to be a father,” Kodjoe beams. Five years after meeting Parker (“I got lucky,” he says, hugging his wife), his dream came true. then life took an unexpected turn. Daughter sophie was born with spina bifida, an incomplete development of the spinal cord. “Our priorities shifted,” Parker says of caring for sophie. In 2008 the couple launched sophie’s Voice Foundation, a nonprofit organization that offers support to like families. Visit sophiesvoicefoundation.org for more information. DEFINING SUCCESS: “It’s the disposition with which you recover from failure, but it doesn’t equal happiness,” he says after his photo shoot in West Los Angeles. “My family is the only source of real happiness that I hold in my heart…. From there, everything else falls into place.” Tune in on Wednesday nights at 8pm ET on NBC.