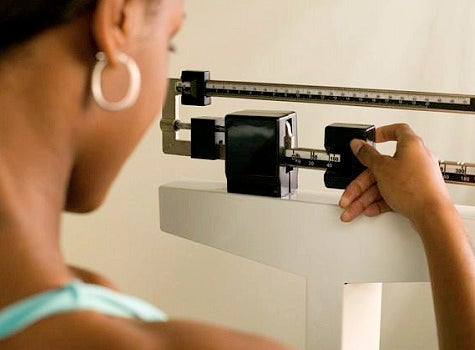 I’ve been wondering for awhile if the collective weight of Black women is affecting our ability to pair off. And by weight, I mean the numbers on the scale, not our emotional baggage, although for some of us, that is heavy, too. I can’t help but notice that in nearly every rundown I read of what it is that Black men are looking for in a Black woman, weight inevitably sneaks onto the list, usually in the form of a passion for “working out” or “staying fit” or “is concerned about her health or personal appearance,” ie, she’s not fat. (Although “thick” in the right places doesn’t seem to be a concern.) Some men, like an ESSENCE.com commenter on a story I wrote last week, just made it plain: “There are very few successful fit Black women available. People talk about this high ratio of single Black men to women, but it is a myth. If you exclude fat women, it is 1 to 1.” Hmmm. Based on the reigning statistics about Black women’s size, “fit” chicks may be hard to come by. * 69% of non-Hispanic Black women are overweight or obese**, according the Office of the Surgeon General * 55% percent of Black women are physically inactive, ie they do no spare-time physical activity, according to an AETNA study on women’s health * 82% of African-American women over the age of 40 are overweight or obese, according to data gathered by the Center for Disease Control in 2002 Yikes! Last week I was on a panel for The New York Urban League Young Professionals, discussing relationships. The following day, another woman who was on the panel with me received an email from a “man” who used an anonymous and obscene email address. He wanted she and I to know we were single because, in so many words, we are fat. She’s a self-confessed 10*, I’m about the same, give or take my mood (I’m an emotional eater.) He wrote: “From your stomach down is where your problems comes in. Brothers are visual… I’m just trying to feed you the real deal of why you may be having a hard time finding so-called real love or marriage. ITS [sic] THE STOMACH: the mac & cheese, the spaghetti, the fried chicken and friend [sic] pork chops have become YOUR OWN WORST ENEMY, like a hater girlfriend, KEEPING BLACK MEN CLEAR OR [sic] WANTING TO MARRY YOU!” Hmmm. Nevermind that I haven’t touched pork in 14 years, or chicken in 10. It still stung. You know what that means. So I rolled the idea around in my head for a week. I thought back to an article I’d read while sitting in Barnes & Noble reading a stack of magazines, as per my Sunday ritual. “Big Love” was in British Elle and writer Amy Maclin detailed her struggle with her weight and pointed out how being fluffy (she gained 25lbs) had a disastrous effect on her relationship. Maclin observed: “Sex happened less frequently, and often it would happen only halfway before Alex’s erection shrank or skulled away entirely, sending us into a maelstrom of tears (mine) and recriminations (first mine, then his.) Then one night we were sparring about our difficulties, he finally said what I’d been thinking all along: that he’d been more excited by me in bed before I gained the weight… That was one of the worst nights of my life… He had dropped a smart bomb right on my heart…” Ouch, right? If you’re like me, the knee-jerk reaction is to tell her to throw deuces and bounce. I mean, a man who loves you is supposed to love all of you, right? And like, if he’s balking at weight, how will he ever handle something really mega like “for worse” (sickness, laid off, parents die) if you even ever get to the altar? She didn’t bounce though. Actually, neither did I the night a BF took a moment to evaluate me in bed and told me he’d never dated a woman my size or who didn’t have a flat stomach. I cried hysterically to the point I dehydrated myself and my eyes puffed up the next day (I also did the same the next day in the middle of a restaurant. And again, when I read this article months later. Yes, in the bookstore. Bad, bad Sunday.) In fact, I began to think the same way Maclin did. Let’s return. Maclin continued: “When Alex said he didn’t want me as much as he used to, I felt betrayed… But I also felt bitten, as a friend of mine likes to say, by the sting of truth… In the dark days that ensued, I could not wholeheartedly agree with the friend who said that is this a**hole really loved me, he should be ripping off that house dress to get to my (no matter how ample) rear end. Of course, I expect to be loved no matter what I look like, but sexual desire just is, isn’t it? The heart doesn’t want what it doesn’t want, I thought, and neither do the genitals.” Hmmm. If weight can affect our relationships, wouldn’t it follow that it can affect our ability to get into one? And although we should all be working out to stay healthy, would you make an effort to hit the gym to get, or keep, a man? Discuss. *The average height of a woman 20-74 years is 5’4″; her average weight is 164.3 pounds in 2002, according to the CDC. Depending on structure and whether she works out, that puts the average woman somewhere between a 10-14. **In case you were curious (I was and had to look it up) if your weight is 10-15% more than what it “should” be, you’re overweight. If you are more than 15% over your ideal weight, you’re in obese territory. Demetria Lucas is the Relationships Editor at ESSENCE Magazine and the author of ABelleInBrooklyn.com where she muses daily on the dating, relationships, and pop culture. Follow her on Twitter at twitter.com/abelleinbk Read more: