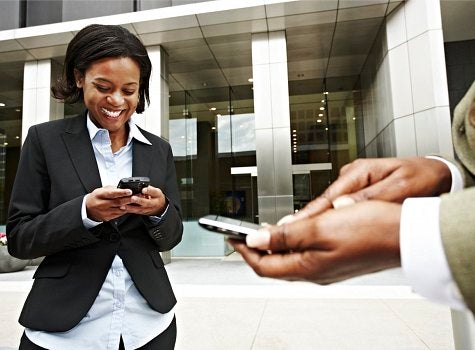 Citing the abundance of trending topics started by Black people on Twitter, Slate writer Farhad Manjoo ponders “How Black People Use Twitter.” Manjoo points out how popular “blacktags” (trending topics started by Black people) like “Black Ghetto Names” and “If Santa Were Black” generally dominate Twitter trends. “Are other identifiable groups starting similar kinds of hashtags, but it’s only those initiated by African-Americans that are hitting the trending topics list?” he asks. “If that’s true, what is it about the way Black people use Twitter that makes their conversations so popular?” Manjoo concludes that Black people — specifically young Black people — use Twitter “differently” from other groups because “they form tighter clusters on the network–they follow one another more readily, they retweet each other more often, and more of their posts are @-replies–posts directed at other users.” Could it be that Black people use Twitter to, you know, socialize? The article, and accompanying illustration, struck a nerve with Black internet observers who saw it as an insult, especially considering that Manjoo’s interest in how Black people use Twitter was piqued by comical blacktags like “#wordsthatleadtotrouble” and his conclusion that everyone participating in these conversations was Black, judging only by their avatars. “This brings to mind the long tradition of minstrel shows and the work of actor Stepin Fetchit which both presented entertainment for white audiences by engaging in stereotypes about African Americans,” writes Blackweb2.0’s Anjuan Simmons. “It also hints at the idea that the presence of Black people on Twitter is odd because it shows minorities using a technically sophisticated tool and this goes against stereotypes about the racial makeup of technologists.” A recent Pew Internet study found that 26 percent of adult African-Americans use Twitter as compared to 19 percent of White adults. This increasing use has been linked greater access to cellphones with internet capabilities. Another study found that Black people are increasingly using Twitter to “talk to one another rather than broadcast a message to the world.”