The physical effects of Hurricane Katrina, which made landfall in New Orleans on August 29, 2005, are still painfully evident 11 years later. More than a decade after the waters of the Gulf completely leveled New Orleans, ravaged entire neighborhoods in Louisiana and devastated portions of Mississippi – the costly storm consumed 80 percent of housing in New Orleans and the damage amounted to $150 billion – homes, leaning with decay and extreme water damage, remain unoccupied and bustling areas that once housed predominantly Black homeowners and residents see few cars down their streets.

But the resilience of the city remains. Shiny new buildings, modern apartments and businesses take up space for the exodus of young white professionals moving to New Orleans to experience its culture. According to Data Center Research, the share of Whites increased from 26.6 percent to 31.3 percent from 2000 to 2015.

For Black residents in Orleans Parish, who still represent the majority of the storied city’s residents at 58.5 percent, that number decreased from 67 percent to less than 60 percent between 2005 and 2015. 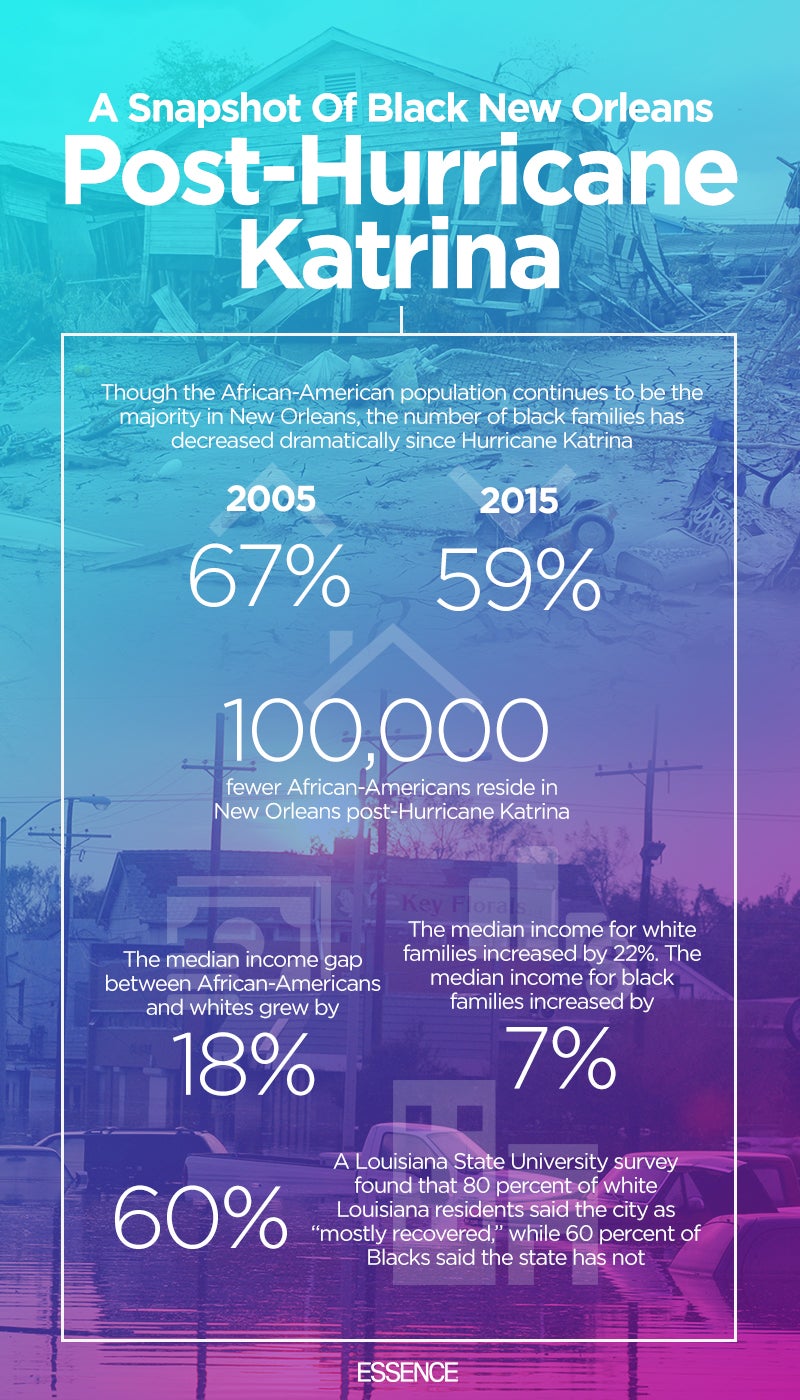 The calamity of Hurricane Katrina, which weighed heavier and more costly for the city’s Black residents due to the placement of their low-lying neighborhoods, has much to do with that. According to the Washington Post, Black residents accounted for 73 percent of those displaced by the storm.

And for New Orleans poor residents, for which African-Americans accounted for one-third, returning with no resources to rebuild seems futile.

For those who return, the stakes are high.

Fifty-five percent of residents in New Orleans are renters. But post-Katrina, 37 percent of renters in the city are paying more than 50 percent of their income on rent and utilities, according to Data Center Research. That number increased from 24 percent in 2004, meaning it’s not unlikely that long-time residents are being priced out of their neighborhoods.

And while the city continues to grow, expanding with amenities for new transplants, many of New Orleans Black residents are being left behind.

New Orleans post-Hurricane Katrina has made a number of gains – from a successful overhaul of the education system to continued rebuilding efforts — but it seems the heartbeat of the city is still in need of repair.