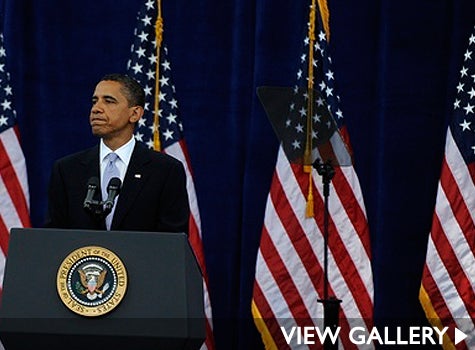 With AIDS being the number one killer of African-American women between the ages of 22 and 45, we talk about the epidemic and Black women around here a lot at ESSENCE. A critical part of that discussion, however, is the high rate among Black men, and on Wednesday the White House Office of National AIDS Policy (ONAP) and Office of Public Engagement hosted a frank meeting for brothers to talk about facts, myths and solutions on the subject. For four hours the experts thrashed out challenges facing Black men –1 in 16 of whom will be diagnosed with HIV in their lifetime, a rate six times higher than that of White men, and more than twice that of Black women. Ideas from the meeting will be used to help inform a national AIDS strategy that ONAP has been developing for the past year. The master plan — which has also been aided by previous White House meetings about HIV and Black women, and public-private partnerships — will roll out in a few weeks. Here are just a few highlights from the spirited conversation of about 80 AIDS workers and activists, most of them Black men. The Down Low: Overblown While the largest numbers of new HIV infection in the Black community are among gay and bisexual men, Black heterosexual men also have some of the highest rates. “A lot of Black women are becoming infected because of risk behaviors of their males partners,” said ONAP senior policy advisor Greg Millet. He also pointed out that, according to studies, there’s no difference in the rate of unprotected sex between men who identify as “DL” and those who do not. “There’s been an awful lot of talk about Black men on the down low, but they do not partake in riskier behavior,” said Millet. Myths About Prison While HIV transmission does occur within prison, data has shown that the vast majority of HIV-positive inmates were already positive before they entered prison. “We’ve been focusing on testing and treatment to all inmates as they enter our system,” said Newton Kendig, assistant director of the Bureau of Prisons’ Health Services Division, who has directed that all inmates across the country get these services.   One of the biggest problems is that after being released from prison, the men have more unprotected sex. There’s also the lack of access to post-incarceration treatment. “Most of these men have nowhere to go when they get out,” noted Dr. Keith Rawlings of AIDS Arms Inc., an HIV/AIDS service nonprofit in Dallas. “Less than 12 percent of prisoners coming out of the Department of Correction in Texas end up still in care six months later.” Homophobia… Dr. Kevin Fenton, director of the National Center for HIV/AIDS at the Centers for Disease Control and Prevention, said that social factors, including homophobia and a stigma surrounding the virus in the Black community, contribute to higher rates of risk behaviors and the spread of HIV. The CDC is conducting research to better understand and address links between social stigma and HIV infection.   Fenton also encouraged the Black community as a whole–businesses, colleges, and entertainment leaders–to talk more about HIV prevention. “Too often we lay the blame of stigma at just the feet of faith leaders when we have to see this as a community issue that needs a community-wide response.”   …And Racism “We have to think about the trauma that a lot of Black men are going through,” said Dr. David Malebranche, assistant professor at Emory University’s School of Medicine, who sees tremendous pain when he talks to brothers with HIV. “We have to start talking about how are we going to equip our young Black men with the tools…to cope and live healthier existences.”   Rev. Edwin Sanders, director of the health program at Nashville’s Metropolitan Interdenominational Church, agreed that racism must be a part of the conversation, pointing out that Black men are not dealing with HIV/AIDS in isolation. “When you deal with the reality of racism, it brings the entire community together in a way that allows us to appreciate the breadth of responsibility that exists.” For more of Cynthia Gordy‘s Obama Watch stories, click here.