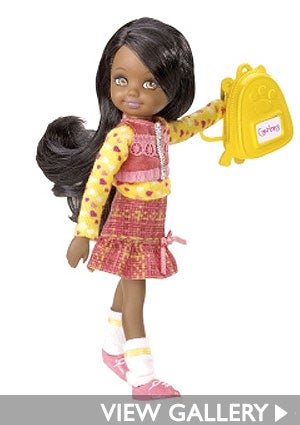 How do you respond to a little girl who thinks she is ugly or that something is not right about her? If your name is Chris Rock, you make a documentary about it. If you’re an average Jane like the rest of us, you fret, you shower her with compliments, and set off to find a beautiful doll that looks like her to drive the message home. The hardest part, however, may be finding that doll.

According to the latest census, the 38.7 million Blacks in the United States spend more than $215 billion annually. Yet our presence and spending power does not make it any easier to find dolls that reflect our skin tones and ethnicity.

Last week Mattel launched their long-awaited line of “So in Style” dolls in an attempt to broaden the availability of Black dolls in the mainstream marketplace. Their noses are wider, their skin tone brown, they have have fuller lips and are dressed with an urban flair. Yet, even before the toys hits the shelves, images were released and Black parents everywhere questioned whether the dolls were Black enough. While the intention was sound, the execution seemed to miss the mark: Their skin tone is light and some have blue or green eyes; their limbs are slender and their hair, for the most part, is fine and straight.

The argument pushed back and forth about how a limited amount of dolls can fully represent an ethnicity, but all agreed that Mattel took a step in the right direction. The purpose was to help improve the self-esteem of young Black girls in those formative years.

Race, self-esteem and doll selection have been inextricably linked since the “doll tests” conducted by Drs. Kenneth and Mamie Clark in the 1940s. For these tests, Black children between the ages three and seven were shown dolls with different complexions and asked which race best reflects their own and, second, which race they preferred. Most of the children identified themselves as the Black doll but most preferred the White doll and attributed positive characteristics to it. The study concluded that the “prejudice, discrimination, and segregation” of that era caused Black children to develop a sense of inferiority.

But more recent research indicates that doll choice has little to do with self-esteem.

“There were flaws in the original doll studies and these were corrected in later studies,” says Dr. Bernadette Gray-Little, Chancellor of Kansas University.  In 2000, Dr. Gray-Little conducted a study while professor at the University of North Carolina – Chapel Hill, which found that despite the relationship of the test in the past to lower self-esteem in Black children, that Black children and White children had similarly healthy self-esteem.

However, says Dr. Gray-Little, “There remained evidence that African American children were not as likely to choose a doll that resembled them in color as much as Caucasian children.”

“The implications of racial identification for the development of self-esteem, is not being able to see being a minority as a positive attribute. One of the ways children learn what is positive is through images in magazines and on TV and in the dolls they have access to,” she added.

“Dolls that are beautiful and that people want to play with help to reinforce positive images, but if you don’t see them out there, it perpetuates the myth that only White dolls are desirable.”

The Black Doll Affair, a national organization founded by Dana Hill goes a step further than providing beautiful dolls by not only collecting and donating black dolls, but engaging young girls in dialogue about themselves as well.

“It’s hard to have this conversation with a six-year old,” says Hill. “But when we show up [at our events], we show up looking like living dolls and the first message sent is ‘Wow, she is a beautiful Black woman and she looks like me.'”

“It’s important to us to have a range of black women involved because we don’t want the children to believe they need to grow up and be a certain way.”

When the Black Dolls interact with the girls, they make it a point to compliment them about their hair and their skin. “We try to engage them with their outer beauty, then talk to them about their inner beauty,” says Hill.

“Dolls are more than toys, they are a reflection of who we are.”