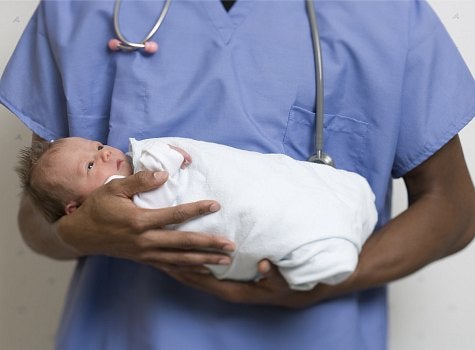 A Nigerian couple living in the U.K. couldn’t believe their eyes when their newborn baby girl was born blonde and blue-eyed. “The first thing I said was, ‘What the flip?’ ” Ben Ihegboro told the U.K’s The Sun “We both just sat there after the birth staring at her for ages — not saying anything.” Ben and Angela Ihegboro named their baby, Nnamchi, meaning “beauty of God” because they believe she is a “miracle baby.” Doctors say they don’t believe Nnamchi is albino, although they think she may have a mutated version of the condition. Experts offer two other possible theories: that she might either be the result of a genetic mutation or her parents have a long dead relative with light skin genes. While baby Nnamchi’s Nigerian immigrant parents may not know of any White ancestry, there is still the possibility of it existing in their bloodline. “We are all of us genetic mixtures to some extent, and occasionally you’ll have a convergence of the pale versions of these genes in African-Americans and African-Caribbeans who have a mixed black and white ancestry,” Oxford University human genetics professor Bryan Sykes told The Sun. Doctors are also puzzled by baby Nnamchi’s blonde hair. “The hair is extremely unusual, said Professor Sykes. “Even many blonde children don’t have blonde hair like this at birth.” The Ihegboro’s other two children Chisom, 4, and Demebi, 2, bear a striking resemblance to their parents. Angela says big brother Chisom is certainly confused by his beautiful little sister. “Our boy keeps coming to look at his sister and then sits down looking puzzled, she said. “We’re a Black family. Suddenly he has a White sister.”