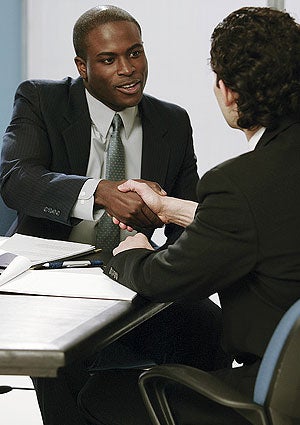 Career and life coach Dee Marshall weighs in on a recent article in The New York Times which describes the unemployment rate for Black male college grads as double that of their White male counterparts. Surprisingly, the joblessness rate for Black college grads is more significant than those without higher education. Males interviewed in the article chose to use a more universal-sounding name on their resumes and other methods to make their race less obvious to obtain a job interview.

Yes, brown people please be clear, even with a Commander-in-Chief of a darker hue and your college degree, when it comes to searching for a job in 2009 the racial gap remains and may even prove to be more than what it once was.

Am I surprised to learn of the recent report about the disparity between unemployed educated African-American males and their Caucasian counter parts? No, I am not surprised because this is nothing new…. this is racial inequality magnified under the light and extreme pressure… however, let’s understand there are several major undercurrents working against us and African-American males in particular but I don’t buy into the notion that scrubbing your resume of all shades of brown [as the men featured in article do] is the problem or the solution.

First, we have the current status of the economy and the fallout of major industries. So, if we’re looking at African-American males with graduate degrees and their inability to convert that degree into a job opportunity, just know that a large percentage of this population (MBAs) is likely downsized from those industries hardest hit in the last 18 months (i.e. financial services/banking). So when you look at the unemployment rate among the college educated we have to put things into context with respect to what was a reasonable pool of employment in one industry will not necessarily fit the new normal or convert to jobs in other industries…It’s just difficult to make up for massive job losses and everybody is competing for the same jobs. When there are fewer jobs to go around the equal opportunity pool shrinks.

Secondly, as African-Americans in this country we have come a long way and not everyone is excited about our evolution and of course we are likely seeing and feeling the backlash of our ten steps forward. While we are certainly not where we should be as a community, where it counts we made major progress and have representation from people of color. Do we need to discuss the powers that be, the influentials who drive the decisions of the rest of world…you know the likes of Oprah Winfrey, Beyonce, Jay-Z, the black overclass and then our President of these United States? Ok, people are pissed off. So when the brother shows up on paper where his vita precedes him or he’s in person for a job interview, we have to remember there’s so many other implications and the major pull is the undercurrent and our pre-existing race relations exacerbated when you have people in decision-making positions bring their own filters.

Bottom line, this is not a new issue and I don’t know that making over a resume is the answer. No doubt finding employment is difficult but not impossible.  Don’t get me wrong I know it does happen; discrimination is alive and well but do something about it or move on.

International Speaker, Author, Life Coach Dee Marshall is the President of Raise The Bar, a coaching, training and development practice for women and she is also the Founder of Young Savvy, a non-profit organization for young women under 30.

The views and opinions expressed in this commentary are solely those of Dee Marshall and do not reflect those of ESSENCE or ESSENCE.com.