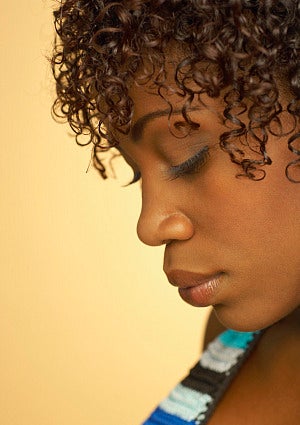 While what Rihanna went through was unfortunate, domestic abuse in other countries is on a whole other level. Jennipher Alupot, a Ugandan woman, age 26, had the life sucked out of her–literally. For the last seven years, her husband has forced her to breastfeed his hunting dogs, as repayment for the “bride price” to his father-in-law. The way Nathan Alowoi sees it, he gave up his two cows to his bride’s family, and so someone, namely his wife has to pick up the feeding duties by giving up her own breasts to the puppies.

Jennipher explained to Independent.co.uk, that her husband would tie her limbs to the bed and force the hungry puppies to her nipple.  He would leave her there with the pups suckling throughout the night, and untie her when the sun rose. In 2002 when the whole horrifying incident started, Jennipher had just birthed a daughter named Achom. Her young child was forced to share her mother’s breast with the dogs. It was, however when her third child, second son Olinga was born that suffered most from the unsanitary situation.

Jennipher recalls her son eventually having fits and foaming at the mouth, a clear indication of rabies, and right before her toddler turned two he passed away. Later, Apunyo, another daughter born to the couple in March 2009, began to suffer from the same symptoms causing Jennipher to stand up against her husband in protest.  That sadly led to Nathan piercing her with a spear under her chin for her insubordination.

Thankfully, that was the straw to break the camel’s back and Jennipher fled to Pallisa in Uganda to seek refuge at women’s center.  With Jennipher and her daughter protected for the last seven months, the women’s center supported by ActionAid is pushing legal action to be taken against Jennipher husband Nathan, who still has custody of her eldest two children.   The case is before the Human Rights Commission, and after making crazy headlines all over East Africa, a bill was passed in Jennipher’s honor to tighten up laws regarding domestic abuse. Ugandan culture and tradition may prevent this bill from being quickly accepted, but at least Jennipher can sleep through the night.