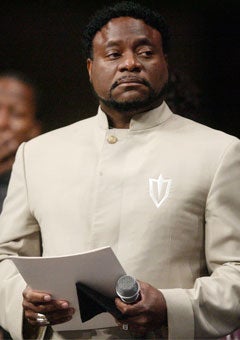 I thought twice about writing about this. Because when you talk about ministers, you’re indirectly talking about God, and Lord knows I don’t want the wrath of criticizing Her. But something must be said about this Eddie Long settlement.

And yes, Rev. Eddie “I will fight this!” (as he told his congregation from the pulpit after the first accusations arose) Long settled the case against him for an unknown amount, which is estimated to be around $15 million.

I found out about the way I find out about everything — on Twitter — when ATL native Big Boi (Outkast) tweeted, “Eddie long settled for 15 million!!! Innocence don’t cost that much. The flock Is f—ed!”

Of course, there’s a gag order, and now we’ll never really know whether Long was innocent or guilty of sexual misconduct with young men he allegedly groomed for the position until they reached the age of consent. But as far as the court of public opinion is concerned, Long is as guilty as OJ (who ironically was found not guilty of killing his ex-wife and her man-friend).

The logic goes something like this: what innocent minister accused of something so scandalous and amoral doesn’t fight to the death to clear his name? Settling isn’t exactly an admission guilt, of course, but this isn’t like a employee filing a grievance and a company parceling out insignificant cash to avoid a headache. Or even like an accused petty criminal with limited funds taking an “L” — a lesser charge — and community service to avoid mounting legal fees.

This here is a character-damning accusation, and in a world where men live and die by the Scarface coda, “All I have in this world is my b-lls and my word, and I don’t break ’em for nobody,” it seems mighty suspicious that a man who stood in a pulpit vowing to “fight” would rather leave a damning question mark hanging over his head about vile misbehavior. What, I wonder, changed his mind?

There are many sad parts about this whole case from start to the anti-climatic finish. Of course, there’s the travesty of those who will turn from God because of the ungodly alleged actions by one of His most prominent disciples. And undoubtedly the pews of New Birth will be at capacity come Sunday, filled with the faithful ready and willing to believe whatever excuse Rev. Long gives for the settlement (if he even offers one), blindly ignoring what seems painfully obvious.

On the top of the list of “What Makes Me Sad About This” is the young men who were allegedly abused. We’ll never have a high court to officially determine their truth, but I will always remember the news footage where one of the accusers talked about the aftermath of Rev. Long’s alleged actions and the bewildered look on the young man’s face as he spoke. The eerie recollection of him being unable to get the minister’s smell off of his body, said to me what no jury ever will.

Demetria L. Lucas is the Relationship Editor at ESSENCE Magazine. Her first book, A Belle in Brooklyn: Your Go-to Girl for Advice on Living Your Best Single Life (Atria) will be published June 14. Follow her on Twitter at @abelleinbk