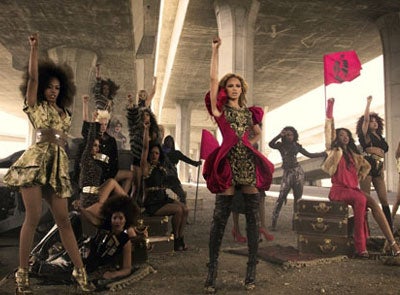 Beyonce’s much-anticipated, highly-delayed video finally debuted on “American Idol” last night. Was it worth the wait? “Yes!” I watched it this morning on YouTube (I’m working on Belle Book Two. Nothing comes between me and my laptop.) “Who Run the World (Girls)” is like Janet Jackson’s “Rhythm Nation” meets Michael Jackson’s “Bad” choreographed by Bob Fosse in the middle of District 9.

It’s totally over the top and a whole lot, which I absolutely loved. The dance sequences? The energy? Bey’s evolving iconic imagery? Yes! Yes! Yes!

But… what in the heck was the message? The lyrics are classic Destiny’s Child empowerment-lite in the vein of “Independent,” “Survivor” and “Single Ladies.” Okay. But what do gyrating, garter-wearing women, twerking-off (while sending a shout to college grads, no less) against a male army in the remote desert have to do with women running the world? My takeaway is that if a woman ever wants to be a conquering queen, the power of the P is her best weapon of choice. Um, what?!

“It’s just music, a video, You’re reading too much into it, D, and it’s not that deep.” I’ve heard it all before like Sunshine Anderson. (Pause. Where is she now?) I get it. Bey-Bey-Beyonce’s job is to be a pop-star and put out good music with hot beats. (Perhaps this video will resurrect the song, which was tumbling down charts faster than tumble-weave on 125th.) Depth doesn’t have to be her domain, but wouldn’t it be nice if it was?

Maybe if more young women saw real substance in pop culture (think Lauryn Hill circa ’96 and yes, I’m officially old for reminiscing about “back in my day”), then they wouldn’t tragically comment on blogs about Beyonce being the new Gloria Steinem (actual comparison made on YBF. No hyperbole by me), completely missing that there’s a difference between p-popping and actual empowerment. And they would know there’s more in a woman’s arsenal than looking fierce, whipping hair and inspiring male lust.

A mind is a terrible thing to waste and so is a perfectly good video that doesn’t match the song. Despite the declarations in the lyrics (and the unrelated hotness of the video), it’s a still a man’s world, and it will always be as long as women think their vaginas are where their power lies.

Demetria L. Lucas is the Relationships Editor at Essence Magazine and the author of A Belle in Brooklyn: Your Go-to Girl for Living Your Best Single Life, which debuts June 14. Follow her on Twitter at @abelleinbk