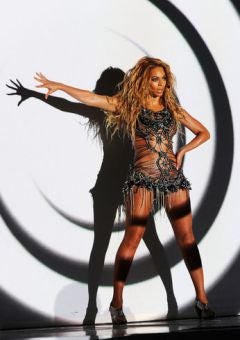 We all watched Beyonce’s performance at Sunday’s Billboard Music Awards in awe. Bey hit the stage and delivered a unique performance — or so we thought. By Monday, the blogosphere was ablaze with YouTube clips showing that Bey’s performance highly resembled that of Italian pop singer Lorella Cuccerini.

Beyonce spoke to AOL yesterday about why the shows were so similar.

“My makeup artist showed me the performance of Lorella Cuccarini a year ago, and it inspired me so much,” Beyonce told AOL Music. “I then met with the talented people who worked on it. The technology and concept were so genius.”

Beyonce also gave credit to YouTube for showcasing Cuccerini’s work. “Thank God for YouTube or I would have never been exposed to something so inspiring. I never worked so hard on anything in my life as that performance for the Billboard Awards,” she said.

You know what they say — there’s nothing new under the sun. Beyonce has inspired so many artists, so why should we be so hard on her for taking inspiration from someone else? Beyonce delivered her own version of a unique performance at the Billboard Awards, and we loved it!