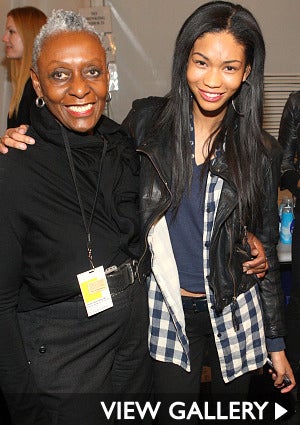 When New York Fashion Week ended on February 19th, the style set immediately began debating whether or not it was a positive season for Black models. The percentage of models of color on the catwalks was uncomfortably low (in fact, numbers were lower than last season), but Fall 2010 wasn’t the bleak “blackout” of seasons past.  Three years ago, the runways had become so whitewashed that Bethann Hardison–the legendary model, muse, fashion force and agent–swooped in to save the day. In November ’07, she assembled some of fashion’s top influencers and held the first of many town hall discussions addressing the industry-wide “blackout.” Since then, runways have slowly become more diverse–and even though this season was not the triumphant Black model extravaganza we’d hoped for, there were definitely some standout moments. Tracy Reese, Diane von Furstenberg and Tia Cibani for Ports 1961 used a near majority of Black models–and Christian Siriano opened and closed his show with Sessilee Lopez. Meanwhile, newcomers like Sedene Blake, Joan Smalls Rose Cordero emerged as bonafide catwalk stars. ESSENCE.com asked Bethann Hardison for her take on the state of Black model. ESSENCE.COM: Back in the late ’80s and early ’90s, models like Karen Alexander, Gail O’Neill, Naomi, Veronica Webb were all over runways and magazines. Why do you think they disappeared? BETHANN HARDISON: Listen, the superstar White model disappeared from the fashion landscape, so of course Black models would suffer, too! Celebrities started landing all the magazine covers and major campaigns. And the runways became devoid of personality. Miuccia Prada started it all in the mid-’90s. She was tired of supermodels stealing the thunder from her garments, so she began hiring blank-faced, anonymous-looking blondes. Without knowing it–and certainly not coming from a racist place–Miuccia started a trend. Next thing you know, designers and casting directors are telling model agents that they don’t want to see any “ethnics.” ESSENCE.COM: That’s utter lunacy. Really, who walks better than a Black model? HARDISON: Exactly. When I was modeling, we had Billie Blair, Wasuma, Pat Cleveland…Black girls with flair and personal style. Designers like Stephen Burrows, Mr. Saint Laurent and Halston were endlessly inspired by them. I remember being at a casting and having a designer literally take the shirt off my back (thankfully, he returned it a couple days later!). We were muses. And then one day, casting directors started choosing models for shows, and that relationship between models and designers deteriorated. To me, that’s the end of fashion–no matter the race of the model. ESSENCE.COM: So, how do you think Black models fared this Fashion Week? HARDISON: In comparison to when I had the first town-hall meeting in the Fall of ’07, we’ve made great strides. Back then, no one had heard of Arlenis. I remember Rachel Roy telling me she had the hardest time booking models of color, because the agencies had no one to show her! That’s changed. Now, brown girls like Lyndsey Scott are doing couture and getting booked in Italy, a notoriously not Black-girl-friendly country. Sedene Blake just started working and she walked in a zillion shows–that kind of response to a model is unusual, even for a White girl. Fashion people are not racist…they’re just busy doing “them.” I doubt a single American designer voted for McCain. Once we called the lack of diversity to their attention, they were down for change. That said, the industry still has a long way to go. There are still agencies with only one or two Black girls–that’s a problem. ESSENCE.COM: Who do you think were the standout models of the season? HARDISON: Sedene Blake, Lyndsey Scott, Joan Smalls, Georgie Badiel (great walker), Kinee Diouf, Sigail Currie, Jeneil Williams, Rose Cordero, and of course, Chanel Iman, Sessilee Lopez and Arlenis. And Jourdan Dunn…even though she didn’t walk in New York, she worked London Fashion Week after two months of maternity leave! Bethann Hardison is currently filming a documentary, “Invisible Beauty,” which explores the relationship between Black models and the fashion industry. Read More:
Loading the player...