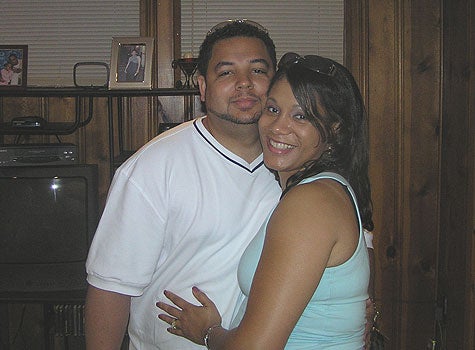 A lot of women would have been happy just to date my man, but being his girl wasn’t enough for me.

I ran across Warren when I was a freshman at Morgan State University. At the time my chemistry course was kicking my butt, so I decided to get tutoring. That’s where I met him. Warren was a cool, super-smart senior who was majoring in engineering and tutoring students struggling in their math classes for extra cash. It definitely wasn’t love at first sight. Don’t get me wrong, he was fine, but I had a boyfriend at the time and since I’ve always been a good girl, cheating was out the of the question–but a lady can have acquaintances, right?

Over the course of the year Warren and I maintained a platonic friendship, but by the time we returned to school for my sophomore year we made a decision to take things to the next level. I was by his side as he completed the fifth year of his academic program and things stayed strong as I completed my studies. Time seemed to fly by. Before I knew it, I was 23 years old and we’d been a couple for five years. Suddenly, I was getting antsy. I won’t sugar coat it, peer pressure was a factor. A few of our friends were getting hitched and it made me start thinking about my future. I mean, we’d been together long enough for both of us to have a good idea about who we were dealing with.

I decided to go out on a limb and pop the question. Even though we were young, he was 27, I asked him to share his intentions. Did he want to get married? And more importantly, did he want to marry me?

By this time I was 24 and I really wanted to start moving forward with a lot of my life goals, such as buying property and pursuing different opportunities in my career. I knew that Warren expected me to consider him, in some ways, in these decisions but I didn’t want to make long-term plans around someone with temporary motives. Warren said a lot of things I wanted to hear. He loved me. He needed to be with me. He wanted to marry me. There was only one area where he fell short: when.

His indecisiveness made me have serious doubts. I’d already committed six years to nurturing our relationship. During that time, despite our ups and downs, I’d given him the best I had–and if that wasn’t good enough I needed him to let me go. So I decided if he didn’t choose me, I would. It wasn’t easy. I told my mom that I was committed to leaving him if he didn’t propose by a certain date–she thought I was crazy. My mother campaigned for me to give this “good brother” more time, touting that he was a caring man, with a great career, who loved me. That simply wasn’t enough. I knew I would not be satisfied waiting around for him to finally come to the conclusion that I would get upgraded from “wifey”. We’d shared six years; most people don’t stick around a job for that long without a promotion. I also wanted the security of being able to legitimately work as a team emotionally and financially.

One day I told Warren that he had a few months–I didn’t give him a hard deadline–to propose. It didn’t happen. I was crushed but prepared to deal with the consequences of my ultimatum. I left him. With tear-soaked cheeks we moved the few things I’d amassed at his place out and I told him goodbye.  As we put my things in the car he asked me how long he had to make a move and I told him I couldn’t give him a timeline–he’d have to marry me or deal with the consequences of setting me free. My heart felt like it had been slammed in a car door over the next few days. Though I refused to see Warren–I knew we couldn’t handle it–we spoke daily. About midweek he asked me to have dinner with him that Friday night at an upscale restaurant and I knew he’d made a decision. He had a car pick me up, we ate, talked, and at the end of the night he popped the question.

Warren and I have been married for six years now–and together for 12. I know putting my foot down was like playing Russian Roulette–fortunately it worked for me. Although I admire my bravado, it did have a backlash. It took me a long time to get over the fact that I wasn’t swept off my feet–we all know the fairytales–and I wondered whether he would he have married me if I didn’t, well, make him.

Overall, I’m happy I stood up for what I needed. As a woman I’ve always wanted to choose what I will accept and won’t–I didn’t have to be with him. I didn’t have to stay and take whatever is offered. And though I’m not afraid to stand up for myself, I’m not the boss of our relationship or family. My husband leads our household; and that’s the way we like it.