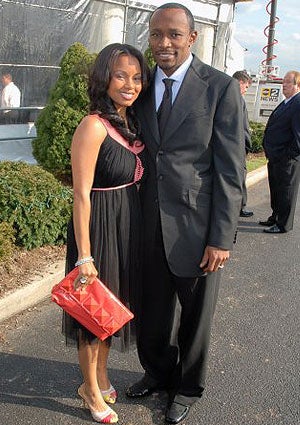 I met my husband, Samari Rolle, currently a cornerback for the Baltimore Ravens, when we were college students in Florida. Back then I had no idea what he was destined to become professionally, but I did know one thing: He got on my nerves. In my opinion Samari was a party boy, you know, the kind of guy who’s hanging out all the time and not focused on his books. Ironically, he wasn’t feeling me either. Samari thought I was uppity, and referred to my friends and I as the bourgesie “Barnes and Noble crew” because we preferred to have our “come to Jesus moments” (a.k.a. girl talks) while downing cappuccinos at our favorite bookstore instead of over shots at a poppin’ club.

Luckily, our mutual friends formed a formidable bond in school; so we’d do little things to check-in, like send cards for the holidays. That’s how he found me. Samari got my info from a Christmas card my roommate sent his mother and tracked me down; we hadn’t spoken in five years. He called and said he’d planned to attend a friend’s party in LA and would love to reconnect. We had a great conversation. In fact, it was so nice that I decided he was ready to date…my home girl. I brought my gal pal to a group dinner so they could hook-up, but he was uninterested, despite my prodding. Eventually, my friend took me aside and pointed out how fixated he was on me – and it was time that I got a clue.

Now some would jump at the chance to date a pro-athlete, but for me that actually soured the deal. I grew up in a family where I’d experienced both feast and famine, so the money wasn’t a huge motivator; I knew it could go at any time. I wanted a man who shared my values and wanted to build a future with one woman, so I did what most ladies do: I tested him. Samari wanted to woo me, so he invited me on a cruise – and I turned him down flat (we all know what happens in those tiny rooms). Instead, I suggested that he fly to meet me in Milwaukee, a city that’s not necessarily a party town, because I wanted to try to build a relationship on conversations, not clubbing.

Over time I realized that though Samari always hung out with the “It Crowd”, he was a wholesome guy at heart. He wanted marriage. He wasn’t into tearing the club up. He cared about his future – and mine. Eventually Samari and I learned our common ground was based on one thing: a mutual respect for our higher power. We both strived to keep God first in our lives. I must admit I was impressed by many things about this man, but one feat solidified my belief that he was serious about making me his wife: he got a tattoo of my initials and the date he decided to commit on his shoulder. My friends swore it was henna – but I knew better – and I was done. We dated for another year and got hitched on November 1, 2003.

Since then Samari’s been a star player on two teams. He supports my entrepreneurial ambitions and will sacrifice to make sure we’re both happy. In turn, I’ve learned when to make myself stop. Work can’t come first, we have three children (he has a daughter from a previous relationship and we have two together) and the TV – or a nanny – can’t raise them. I also have to create time to make sure he feels loved, supported and encouraged. It’s a lot, so above all, when times get tough we both turn to prayer. I’ve seen how it can change things. My husband and I go to church as a family and pray together with our children; it’s in our DNA. It’s our sustenance.

Our spiritual connection and shared values are the glue that keeps us together. It reminds us to place family first and make each other’s needs are our priority. We can only credit our higher power for the blessings we have, the guidance we’ve received – such as putting other likeminded married couples in our life – and for giving us strength, patience and faithful love. So when it comes to groupies, for us, that’s not an issue. I pray it stays that way.