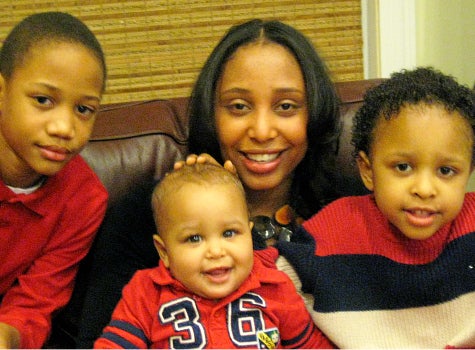 A 30-year-old Chicago woman shares why she and her husband took a young relative into their home and hearts.    I met a guy who I knew I couldn’t let get away when I was 19 years old. I loved the way he smelled. I adored the sound of his voice. I daydreamed about holding him. Most importantly, I knew he needed me. Walter, my baby cousin, was barely out of the womb when a family member brought him over to my grandmother’s Baltimore home for a visit. I’ve never been a “baby” person but for some reason I was drawn to him. His backstory read like a newspaper clipping that would be fodder for The Wire: drug-addicted parents abandon newborn baby in tough big city. Fortunately, my family wasn’t having it. Shortly after his birth Walter’s great-grandmother took him into her home, but she was in her late 70’s. In the twilight of her life she was struggling to keep up with an active, witty and wily little boy. I knew she needed help and, instead of spending my weekends partying in undergraduate school, I’d go get Walter. Over the next few years he and I formed a loving bond. He trusted me. He respected me. And unlike his parents, who were still battling drug addiction, he knew he could depend on me. Eventually, I introduced my boyfriend, who would later become my husband, to the toddler and he suggested that we adopt Walter after we wed. That was the deal cincher.    At 22, I was a bit nervous about becoming someone’s mother but I loved Walter, and our connection was so natural. Plus, I also knew I’d be able to bring him into a loving two-parent household; the question was when. After graduating from college I moved to Chicago and began planning my wedding. I wanted to wait until after the ceremony to insure I could focus on getting Walter acclimated to his environment. He wasn’t having it. Walter campaigned harder than Team Obama ’08; he wanted to move, like yesterday. Though he was only 4 years old, the perceptive youngster knew two things: his life in Baltimore wasn’t ideal and he was ready for a change.    Walter learned how to use caller ID and would call both my fianc and I, to remind us that he wanted to be part of our family. We realized it was time to make a move. Instead of waiting until after our wedding as planned, we brought Walter to stay with us in the summer of 2003 and began the legal adoption process. Due to bureaucratic red tape it took 14 months before Walter could permanently reside with us, but we fought hard and it happened. My husband and I were very excited about finally bringing our son home–and apparently we celebrated… too much. One month later I found out I was pregnant! Today, I live with four men who I love dearly (I also have a 7-month-old son, Shi). Walter, 11, and Jackson, 4, have the typical big-little brother relationship–Jackson thinks Walter can levitate, and Walter wants the standard level of pre-teen privacy and space. My boys argue, make-up and tear up my house, together. You have to love it. With so much going on my husband and I have devoted space to making sure we are a united front. The rug rats have to be in their rooms by a certain time each night so mommy and daddy can talk, snuggle and do other grown and sexy things. We want to preserve “the fantasy” and our union.    There are trials–but adopting my eldest son is the best decision I ever made. I’ve never regretted that choice for a second. Ultimately I do not have control over Walter’s path, but I hope that our ability to expose him to what he can be will make a difference. I am grateful and honored to have him in my life Read more: