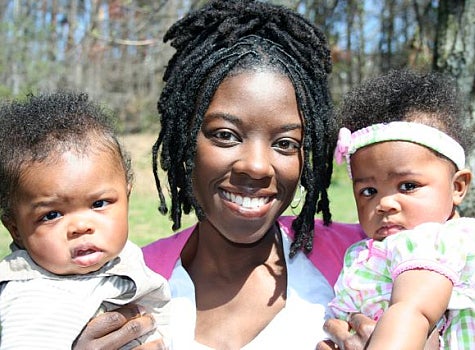 Last August I had the most impractical blessing ever: I gave birth to twins. Yes, they’re adorable, and I thank God they’re healthy. But the jump from a family of one to four–we can’t forget their loving dad–made 2009 one of the craziest years of my life. I didn’t grow up around children. So though I’ve always wanted a family the logistics of how and when was simply fodder for my daydreams. That all changed last January when my life stopped reading like a Black romantic comedy and turned into a Lifetime special of the week. One day my boyfriend and I were talking about what movie we wanted to see and suddenly we started discussing our new life plan…because we were anticipating a child. Then the vomiting started. I threw up so much that I had a cheek print around my toilet rim. Within a few weeks my new must-have accessory became vomit baggies. I’m not the super dramatic type, so when I told my doctor that I was dying she called me in to check things out. During my next doctor’s visit I learned I was carrying the fifth set of twins in my family. All I could do was laugh. That night I asked my best friend, “What am I going to do with two babies?” and she replied, “Well, what would you have done with one?” Though we chuckled about me being the least likely candidate for motherhood, I was scared. I’d never changed a diaper. My down time consisted of traveling, kicking it and partying with my friends–and they could all clean and feed themselves. What if it took a while for my maternal instincts to click? What if it never happened? I guess God knew my anxiety needed assuaging before the birth, so he placed me on the motherhood AP track right away. Since I was so sick I wasn’t gaining weight and my babies’ ability to thrive was jeopardy. My doctor gave it to me straight: You need to eat 3000 calories a day if you want to have healthy babies. That’s when clicked. I’m already a mom. Luckily, I had a supportive mate and bunch of friends to help me through this time. One of my good pals, a certified nutritionist, created meal plan for me that would only be envied my linebacker. I drank smoothies and milkshakes. I ate loaded baked potatoes. I snacked around the clock. This may not seem like a big deal to most, but for a pint-sized woman who’s throwing up all day, food was my best friend and worst enemy. In between gorging I’d watch episodes of MTV’s 16 and Pregnant. I know it sounds hilarious but watching these girls go through so much drama reminded me that I was fortunate–even if I was scared and sick. Last August I gave birth to healthy, beautiful twins. My delivery was smooth, but shortly after I became ill and had to be hospitalized for three days. Once I came home it was on. My life became consumed with diaper duty, breastfeeding -simultaneously- and changing clothes. I don’t get much sleep. I rarely go out. But it’s worth it. I am a mother. I know my kids cries, smiles and their tears. I definitely can’t say it’s been easy, but it’s definitely worth it. I am the mother I’ve always wanted to be. I know the challenges I faced during my pregnancy prepared me for this journey. I couldn’t have asked for a more beautiful struggle. Read More: