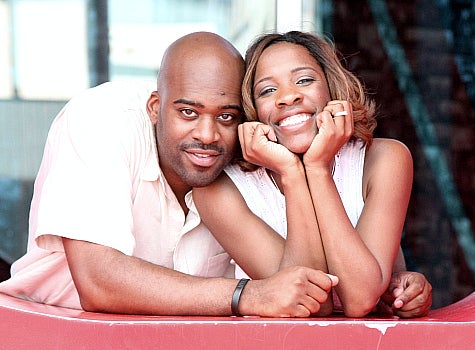 Like many women I had a mold of what my dream guy would be like. You know handsome, God-fearing, college-educated, successful career, and earning twice as much as I do. In fact, I spent my first few years out of undergraduate school on the hunt for that guy. Though I found a few, I never found the one. Eventually I decided that I needed to do something differently; I couldn’t continue to live by my 16-year-old life plan. In 2002, I was single, but set on not settling, so I decided to clear my mind by banning alcohol and sex from my life. That’s when I met Steve. We were introduced at a bar through mutual friends and hit if off. He got my humor. I loved his spirit–and his handsome face. It was instant chemistry. When we got around to talking about careers, I found out that he was a subcontractor working on a project replacing ATMs around the country. I was a software development consultant. We both made decent salaries, but I earned much more than he did annually. Since I grew up in a home with a white-collar mother and a blue-collar daddy, Steve’s career wasn’t a big issue to me. Still my friends raised concerns. They’d say things such as “can you see yourself marrying someone like that” or “you know finances will be an issue in marriage.” Luckily, I never believed that being equally yoked with your husband had anything to do with credentials, only divine order. I always felt like God brought Steve into my life at the right time because he was perfect for me. However, there were a lot of differences–and I knew my friends were right. Money was a big issue. We didn’t just have different income levels; we had distinctive spending habits. For example, when I met Steve he was driving an Avalanche truck–which I admit was a huge turn-on — but nothing gets me more excited than good credit and a nine-month savings nest egg. He had neither. I’m an anal saver, but I love to shop…on sale. Steve will buy what he likes, but will shop at full price. Since we knew that finances destroyed relationships, we always talked about it. When Steve decided he was ready to be my husband, I found out a few things that were shocking in pre-martial counseling. First, he’d been listening to my lecturing about repairing his credit and did it. Secondly, he resented me constantly monitoring his spending. He felt it was belittling. So we decided to do the his/hers/ours money pots per financial gurus Suzie Orman and Dave Ramsey. Today I manage the family budget–Steve knows that I’m better with money–but I’m hands off with his personal spending pot… or, I try to be. We compromise. I’ve learned to relax and enjoy the small splurges, like nice dinners, and he’s learned to shop on sale days. It’s working. During pre-marital counseling our pastor asked whether we could talk, enjoy and love each other under the most challenging circumstance, like being locked in a vault?  I knew my answer was yes–throw away the key, honey!   All in all, I lucked out, kind of like when you find that perfect dress and you just know it was made for you. I married a man who’s my best friend and perfect balance. I can tell him anything; I really just love him. I know if I kept the focus on his collar I would have missed the most important thing: his heart. Read more: