Ayesha Curry—who is the wife of back-to-back NBA MVP Stephen Curry, and who happens to have hung out with First Lady Michelle Obama at the White House—is a lot more like you than you think. She struggles to juggle the responsibilities of being a mom and wife while striving to maintain her own identity. She loves a bargain. And despite her access to personal chefs and posh five-star restaurants, she still prefers sitting down with her family for a simple home-cooked meal. The latter is a big reason the 27-year-old Canadian native decided to write her cookbook, The Seasoned Life: Food, Family, Faith, and the Joy of Eating Well (Little, Brown and Company), which hits shelves this month.

“When I was growing up, eating together as a family was the easiest way to open the lines of communication. It was where we had our best and worst conversations,” says Curry, who has four siblings. “I feel that’s being lost today with a lot of families because everybody’s on the go. I get that people can’t do it every night, but even once a week it’s important to unplug and catch up with each other.”

In addition to providing traditional recipes for the novice cook, The Seasoned Life documents Curry’s exciting journey as a wife, mother, daughter, sister and friend. “This feel-good book shares my childhood, how I met my husband and how everything I experience involves food,” she says. She even peppers the pages with at-home how-tos, such as the way to create fragrant body scrubs using kitchen staples or items in your pantry. 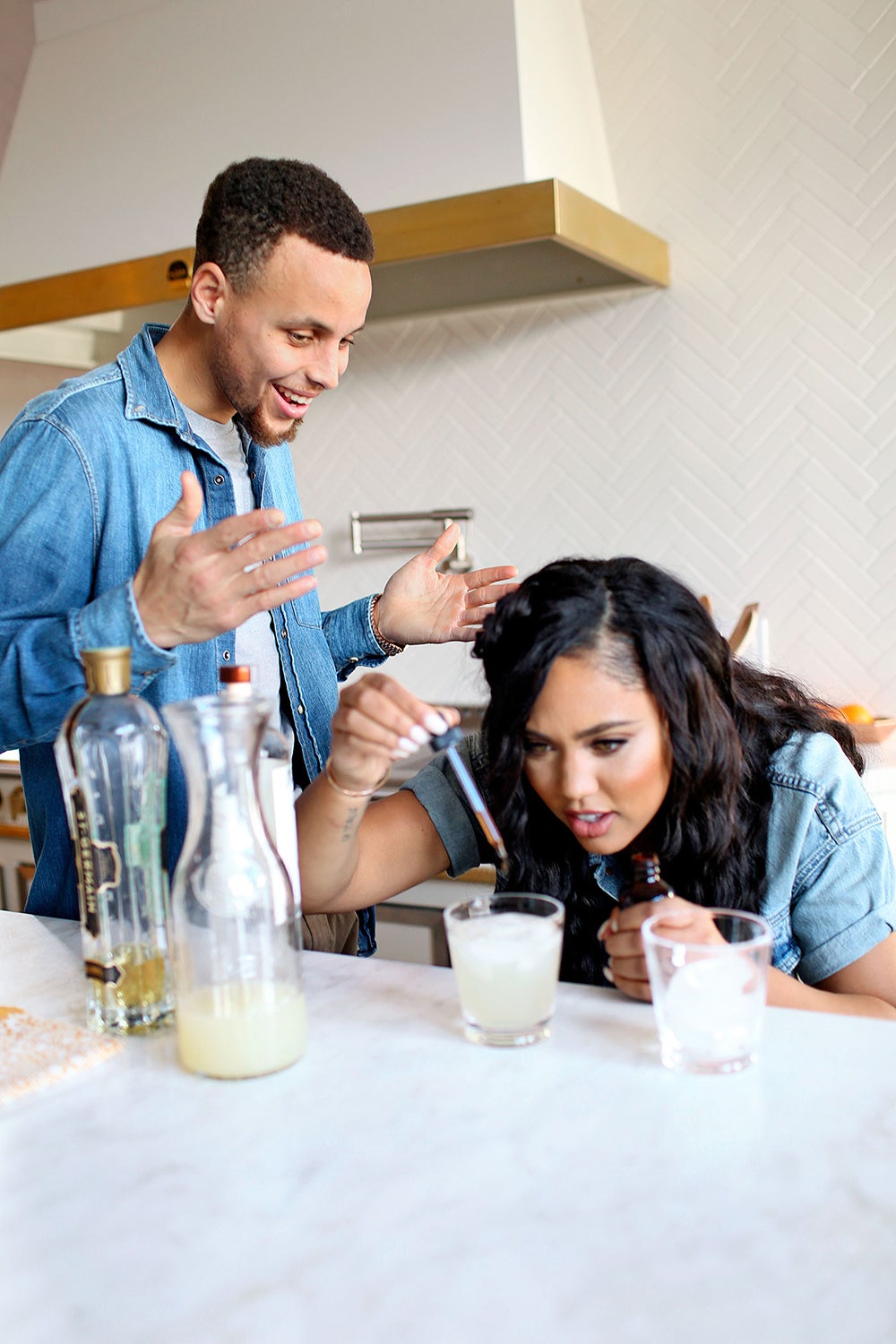 CULTURE MEETS CUISINE
Curry’s tome carefully curates 100 of her favorite recipes, some of which feature an interesting backstory, and reflects her Caribbean and southern Black roots. “My mom is from Jamaica. This was a huge influence on my food,” she says. “Jamaican food is definitely my favorite when I can get it, and I shared what I know how to make best.” Her grandmother Gwendolyn’s Escovitch, Jamaican Chicken Curry and Fried Dumplings with Fried Plantains are tasty highlights.

Subscribe to ESSENCE’s daily newsletter for the latest in hair, beauty, style and celebrity news.

When Curry was 14, her family moved from Toronto to Charlotte, North Carolina. It was there that she met Stephen—they both had joined the youth group at Central Church of God, which their parents attended. “Moving to North Carolina was a big culture shock,” she says. “I was definitely aware I was a minority there. That wasn’t the case in Toronto.” Eventually the teen adjusted to life below the Mason-Dixon Line and even learned to embrace southern cuisine. “I can’t get enough of sweet tea,” she says with a laugh. Savory dishes in the cookbook include Sweet and Savory Shrimp and Grits and Carolina Chowder.

MARRIAGE IS THE MAIN COURSE
At 17, Curry left for Los Angeles to pursue acting. She then began to hone her culinary skills since she was no longer able to eat her mother’s home cooking. While in L.A., she received a Facebook message from Stephen, whom she had not seen since their days at church. He was in town for an event and invited her to meet up. The duo spent time around the city and started dating once she moved back to Charlotte. On July 30, 2011, they exchanged vows in the very church where they met.

When asked if she recalls the first meal she prepared for her hubby, Curry enthusiastically responds, “I do! I made him these chicken quarters with a southern seasoning [that came] from his dad. I went to his parents’ house while they were grilling and they used it. I took some home with me. I smothered the chicken in butter so that the skin got crispy. I remember that chicken because he loved it. I guess it worked.” Curry’s favorite recipe in the book happens to be another signature poultry dish: her mother’s Brown Sugar Chicken. “When it sits in the refrigerator, it gets better with time.” 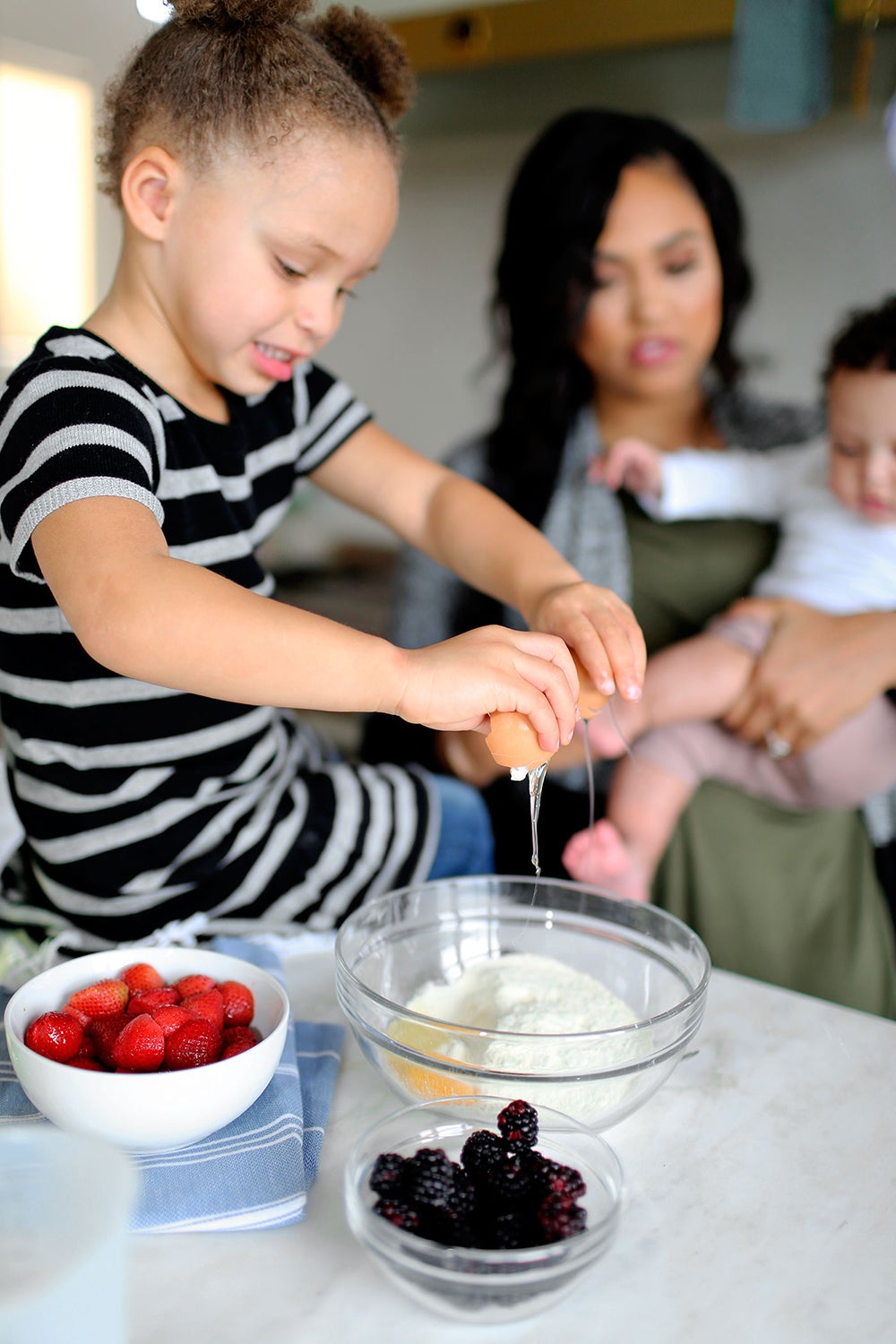 But not everything this entrepreneur cooks is a slam dunk, like her now infamous garlic eggs: “I experiment and sometimes things come out really bad.” Her attempt to “elevate” her then fiancé’s scrambled eggs by seasoning them with garlic powder was an air ball. “After spitting them out, he thanked me, then politely asked me to return to my usual method for eggs,” she adds.

These days, one of her favorite dishes to make for Stephen— especially when she wants to get a bit fancy—is Balsamic Lamb Chops. With two young daughters, the couple make keeping their connection a priority. During Stephen’s acceptance speech for his unanimous vote as MVP of the NBA for the 2015–16 season, he acknowledged his wife: “None of this is possible without you. You’ve given me the opportunity to go out here and work as hard as I do—all while holding down the house and doing the little things that keep our family going.” Curry was stunned. “It really meant a lot to me,” she says.

MILLENNIAL MOM MIXES IN THE TRADITIONAL
As a self-taught kitchenista, Curry has steadily built her own lifestyle brand and now has more than 3 million loyal followers on Instagram. Still there are those who think she should keep any advice on living to herself. First there were the memes featuring photos of Curry in the kitchen with quotes throwing shade at athlete groupies that trended on social media. She was blindsided. “At first I was upset because there were people who didn’t realize I didn’t make them,” she says. “I never want to put anyone down, and I don’t think anything bad about anyone and their lifestyle choices.” As the memes subsided, Curry got another dose of backlash during the 2016 NBA Finals, when she hastily deleted a post questioning the officiating at a game after her husband had fouled out. ESPN commentator Stephen A. Smith advised her to tone it down and be more like LeBron James’s wife, Savannah. Curry quickly set Smith straight on Twitter and rejects the stereotype of cattiness among the wives of basketball players. “It’s a huge stigma that most of us are trying to change,” she says. “We have passions and goals and are supportive of one another. It’s the complete opposite of what’s portrayed on TV.”

Curry has little time for haters, with her life at home. A short time after getting married, the couple learned they were going to become parents. “Everyone thought we were going to have a honeymoon baby. But we made it to three months!” she admits, laughing. On July 19, 2012, daughter Riley Elizabeth Curry was born. Ayesha became a mom again on July 10, 2015, to another baby girl, Ryan Carson Curry. Both kids appear in The Seasoned Life, which includes Riley’s preferred dish: her grandpa’s famous meatloaf. “My dad’s meatloaf is the bomb,” says Curry. “And it’s a great way to get kids to eat veggies. They won’t know what’s in there.”

According to Curry, Riley also isn’t aware of her undeniable #BlackGirlMagic. The precocious toddler innocently stole the hearts of millions during her father’s NBA playoffs postgame press conferences in 2015 and has been a pop culture phenomenon since: “I think people notice her more than they do Stephen. She has no clue she’s a star. We didn’t intend for any of this to happen.” Curry is adamant about maintaining some sense of normalcy in her daughters’ lives. “Until Riley is old enough to make her own decisions, she’s going to be a child,” Curry says of the countless offers she receives for Riley to flex her star power. “I’m definitely limiting how much attention she gets and what she does. It’s a thin line.”
Another line that Curry, who opened a pop-up restaurant called International Smoke in San Francisco this summer, knows well is juggling the demanding roles of wife, mother and working professional. “It takes a village,” she says. “I used to be reluctant to
accept this, and think, Yeah, okay. But now I’m like, ‘Yes, please help me!’ It’s hard to balance it all. It’s something I’m still trying to figure out.” Her words of advice to other new moms: “If you can get help, don’t feel ashamed to use it. It’s possible to be happy, have a family and pursue your passions—even if you alter them a little.”

10 Famous Couples Who Were High School or College Sweethearts

THE BEST IS YET TO COME
Though most recipes in The Seasoned Life are savory, there are sweet options for readers, such as the Pumpkin Squares that have now become a go-to treat for her own family.

Next up the multitasker will be introducing Gather, a meal-prep delivery service. She also plans to reintroduce her line of merchandise, including aprons and olive oil. In the meantime, Curry yearns for readers to feel her passion for food through her book. “I cooked and styled every dish in The Seasoned Life,” she says. “I worked my butt off. I wanted the book to be approachable.” For those who are intimidated by cooking, she offers this, “Whether you are trying to impress a date or are newly engaged, this is a great book for everyone. I want people to write all over it and add their own spin.”
Pressure for the couple to continue to inspire #relationshipgoals is high. Curry keeps her household and faith the focus. “We’re not doing it for the ’gram,” she says. “We are living for God, each other, our children, and enjoying life.” 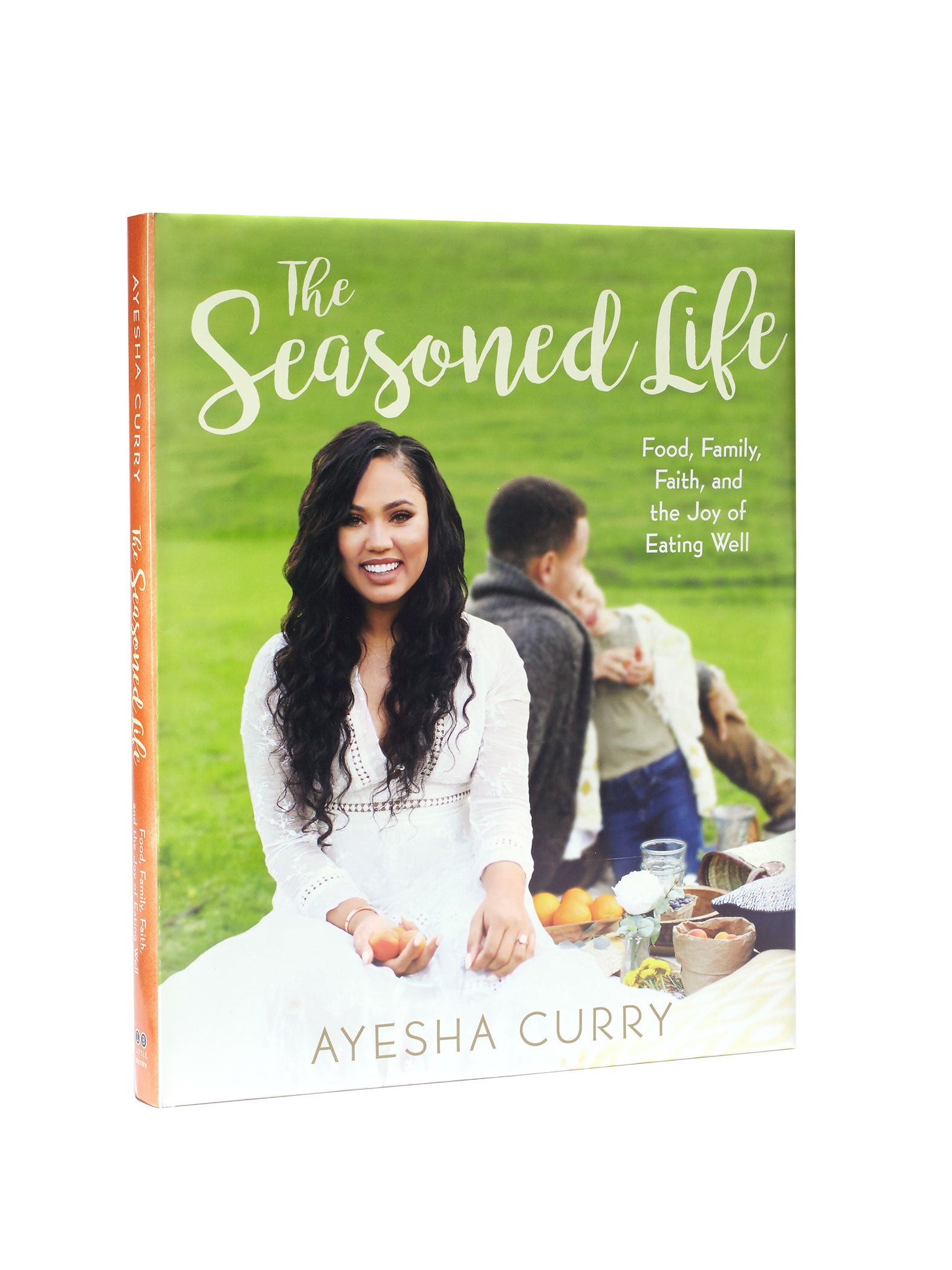 This story originally appeared in the September issue of ESSENCE.