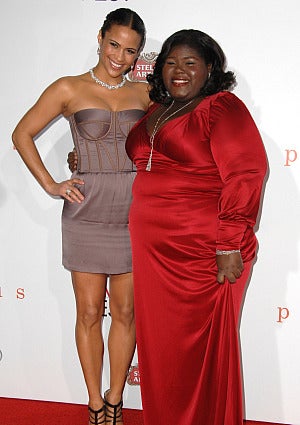 As we watch zaftig-and-proud actress Gabourey Sidibe make the rounds the awards season, we can’t help but think that her presence has added another layer to the debate about plus-sized women and the fashion industry. In the past year, Sidibe has landed the cover of high-fashion magazine V, she’s been swanning around the talk show circuit, uber-confident and dressed to the nines, and she’s even made the red carpet looks different–when was the last time you saw paparazzi lining up to shoot a plus-sized actress? This awards season, it’s not a thing to see Gabourey striking diva poses next to her more traditionally model-esque co-star, Paula Patton. Seemingly as a result of her visibility, the fashion industry has been inspired try and represent the shapes of all women. But according to a fascinating piece in today’s Washington Post, Robin Givhan asserts that the issue is more confusing than ever. This season, many fashion magazines ran pieces featuring plus-sized supermodels (like the striking Crystal Renn)–but at around 5’10” and a size 12, they’re far smaller than the average American woman, who falls around 5’4″ and a size 14. So what exactly is plus-size? And if most of America is a size 14 and up, why don’t designers create more clothes to fit her? Why don’t magazines really cater to the real woman, instead of producing one-off “size” issues featuring perfectly proportional, cellulite-free plus-size models who, despite being bigger than than their ultra-thin counterparts, still resemble the “after” shots in a weight loss ad. The most obvious answer would be that the fashion industry is a dream factory, and that the rail-thin models wafting down the runways and staring blankly from glossy magazines are aspirational–not meant to be realistic, only a fantasy. In the Washington Post, fashion editor Robin Givhan says that it’s not about the models at all–it’s about the designers’ ego. “The most significant difference in creating a dress for a larger size is that often a designer has to tamp down his ego,” she surmises. “He can’t as easily force his vision onto the woman since she doesn’t have the physique of a hanger.” The bottom line is that it’s easier for a designer to make his crazy sequined sack dress look hot on a skinny model than it is on a bigger woman. The discussion is exhausting and infuriating, but Robin Givhan’s piece is genius. We’d love to hear your thoughts on the plus-size woman’s place in fashion. Do you want to see more realistically-proportioned women in magazines and on the runways? Are you frustrated with the lack of fashion for plus-sized women? Or do you think thin will always be in? Let us know in the comments section.