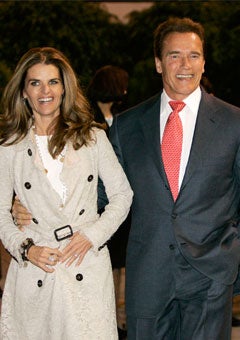 Disclaimer: I don’t think all husbands cheat. Most? Eh… most surveys put the estimate around 60% (and 50% for women). I won’t waste your time going into all the popular potential reasons why — since they usually blame women somehow, and I don’t buy into the nonsense that someone is responsible for anyone’s personal actions.

Bottom line: what a cheater does — male or female — that’s on him or her and whoever they we’re cheating with.

Now that that’s out of the way… let’s talk about the complete and utter filthy grimey-ness of bodybuilder turned actor turned governor turned ultimate cheating whore of a husband Arnold Schwarzenegger.

This morning, the L.A. Times revealed the cause of his split from Maria Shriver, his wife of 25 years. Turns out the marriage will be duly terminated because ol’ Arnie was getting it in with “a staff member who worked for the family for 20 years.”

“[Shriver left] after she learned he had fathered a child more than a decade ago — before his first run for office — with a longtime member of their household staff. Shriver moved out of the family’s Brentwood mansion earlier this year, after Schwarzenegger acknowledged the paternity. The staff member worked for the family for 20 years, retiring in January.”

Pause. Did you catch that? Not only did he cheat on his wife with someone who worked for the family — i.e., Arnold AND his wife — he had the woman he was cheating with and who he had fathered a child by showing up for work everyday FOR TEN YEARS. What in the world? No wonder the California economy was such a mess all those years. How can you concentrate on work, when you have alla’ that going on at home?

And it’s not like Arnold didn’t know the kid was his or assumed it was the husband of the “staff member” (yes, she was married too, more on her in a minute). The L.A. Times also reported: “Schwarzenegger took financial responsibility for the child from the start and continued to provide support, according to a source who declined to be identified.” And no, I’m not throwing him any points for that. Men are supposed to take care of their kids.

Now about this “staff member” here… I can’t let her off the hook. There’s plenty of people who will say that she owed Shriver nothing because Arnold was the one married to her. But whatever way you view the staff member’s moral obligations, you’ve got to be asking, what in… I can’t even say God because clearly She has no place here — the devil’s name, possessed that woman to keep showing up every day, smiling in Shriver’s face, pretending she hadn’t banged (or was still banging) Shriver’s husband, and helping the family?

That’s some devious, disgusting behavior. And let’s not pretend the staff member was between a rock and a hard place, and didn’t have the means to quit. Secrets like this don’t stay such for a decade with some serious hush money involved. And if the “staff member” wanted to keep working so as not to arouse the suspicion of her own husband, couldn’t she have gone to work for someone else or asked Arnold to strongly recommend her to another family? Or was this her way of keeping her kid, and herself, close to “her” man?

Lawd, there are some things I will never understand, and this sick, twisted okey-doke of an adulterating pair is going high on the list. My heart goes out to Maria Shiver and her children, and to the “love child” caught in the middle of his parents’ utter recklessness and stupidity. For Arnold and his decade-long chick on the side? The finger. Guess which one.

Demetria L. Lucas is the Relationship Editor at Essence and the author of A Belle in Brooklyn: Your Go-to Girl for Advice on Living Your Single Life (Atria). Follow her on Formspring at Formspring.me/abelleinbk