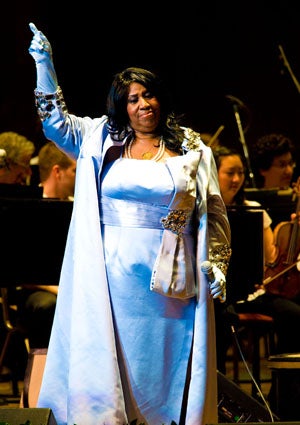 She asked for just a little bit of “Respect.” Now, Aretha Franklin is protesting to the Detroit police about the department’s handling of the case involving an attack on her son, Eddie Franklin. The 52-year-old was beaten Monday night at a Detroit gas station. He was later rushed to the emergency room, were he received surgery on his jaw, which is now wired shut. Police said they tried and failed to take a statement from Eddie Franklin in the hospital, according to the Detroit Free Press. On Thursday, the Queen of Soul released a letter saying she wanted to set the record straight about her son’s attack, reports the Detroit Free Press.  “After observing my son on Tuesday, it was clear that he was unable to communicate with anyone after such a traumatic attack and with his jaw wired,” Aretha Franklin said. She continued, “The officer probably would not have been able to give a statement if he had been attacked by three men the very next day, either, and it was totally unreasonable to expect Eddie to do so as if he were not being cooperative.” The police department responded with, “Our department has been in contact with the Franklin family and we are actively investigating this crime,” said Detroit Police Chief Ralph Godbee Jr. in a statement. “Whenever a citizen becomes a victim of violence, it not only affects their family, but the entire community.” What do you think?