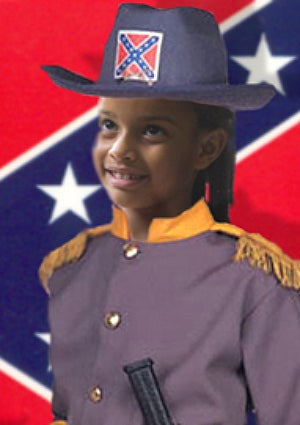 Momlogic writer Kimberly Seals Allers explores the recent declaration by the governor of Virginia that April would be Confederate History Month. It reminds her of the time her daughter’s private school hosted a Civil War party where the students–“even the kindergartners”–team up as Union or Confederate armies. The governor of Virginia recently decided it was a good idea to issue a proclamation marking April as Confederate History Month. What was he thinking?! That decision has turned into a hornet’s nest of CNN proportions, and he was forced to feign contriteness and reissue his statement. You expect that kind of stupidity in politics. But you can imagine my shock when I found myself in the middle of a Confederate clamor at my daughter’s school, of all places. A few years ago, my daughter attended kindergarten and first grade at an exclusive (expensive), mostly white (expensive) private school (expensive). The headmaster, who was retiring, was an avid Civil War buff, and there were several events planned throughout the school year to honor his tenure and service to the school. I attended most, and did my working-mom-with-a-one-hour-commute best to be supportive. Toward the end of the school year, the faculty and PTA announced that the annual Field Day event would have a Civil War theme, with the students — even the kindergartners — playing on either Confederate or Union teams. Seriously? This is where things went too far. I’m all about celebrating history. And I can even stomach the parts that I don’t like. But I really couldn’t see my 5-year-old brown daughter playing on the Confederate team. And I thought it was extremely insensitive and disrespectful to the fewer than 10 African-American children in the whole K-8 school to have them play games under the banner of a group that wanted their ancestors to remain enslaved. Some people may take lightly what the Confederacy stood for, but I don’t think educators should be on that list. I arranged a meeting the headmaster. I calmly expressed my concern over the Field Day theme and stated that, as the school strives to give students “teachable moments,” I was concerned about the lesson they would get from playing games as Confederates. I also reminded him that the Civil War was a war to maintain slavery — a system that denied African-Americans their human rights. Is this really the right backdrop for relay races and kickball? He said the war was about state rights. “Yes,” I said, “a state’s right to keep slaves.” He said I was being overly sensitive and looking too deeply into it. “Really? Seems like somebody didn’t think deeply enough,” I said, as I tried my best to remember my NYU and Columbia vocabulary — even though I felt my Brooklyn, N.Y., roots bubbling to the surface. At the end of the extremely frustrating conversation, it was clear I was getting nowhere. I respectfully let him know that my daughter would not be attending school that day to participate in the disgraceful Field Day. He just smiled and said that was fine. I walked out of that office feeling voiceless and invisible, and left it alone. Ever since then, I’ve regretted not going one step further. I’m a journalist, for crying out loud — a journalist who could have summoned three newspapers and a television station before I left the school parking lot. But I didn’t. After working so hard to try to “fit in” with the school culture, the other moms, the PTA and the board, I chose not to fight that battle, especially because of my daughter. She was already feeling uncomfortable with getting so many questions about her hair being braided in cornrows. It’s another one of those Black mom things that not everyone will understand. It’s one of the kind of trade-offs that often frustrates me. Although my child was getting an excellent education, it was clear on that day that the headmaster didn’t care about all of the students (that was my daughter’s last year there). And that’s the problem with Gov. Bob McDonnell. While throwing a political bone to the Sons of Confederate Vets, he forgot that he represents all Virginians — even the African-American ones. I’m just glad to see that he wasn’t able to get away with that kind of disrespect. To read more Kimberly Seals Allers stories, visit Momlogic.com. Read more: