Amandla Stenberg’s name has been popping up in the media a lot lately— from cash cropping cornrows to being celebrated for making TIME‘s 2015 list of the Most Influential Teens. Amandla has a lot to say and we’re listening. In her most creative project yet, Amandla teamed with writer, Sebastian Jones who has a track record of writing successful books for children of color, to produce a comic book. The book, which Amandla describes as a “comic book with fantasy,” aims to reach and empower young girls and is titled Niobi: She is Life.

The protagonist of the story is an adolescent girl named, Niobi who is an orphan and multi-ethnic, in that she is half elf and half human. In an interview with Instyle Stenberg mentioned that she relates to Niobi in many aspects, one being that she too is biracial. “There was a time when I didn’t embrace my racial identity as wholeheartedly as I do now,” Stenberg says. “So it appealed to me to explore a character who is dealing with the fall from being two different races.”

The comic book launched early this month and explores issues of identity, race and girl’s empowerment. “We often hear about the hero’s journey, but that hero is rarely a girl and certainly not one of color. I want girls to know that they can be at the center of a big story—their own lives— and they don’t have to be marginalized.”

Niobi: She is Life retails for $3.99 and is available for purchase online at strangercomics.com. Stenberg is already at work on a second part, which will hit hit stands in February; and the starlet hopes that Niobi will one day make it to the big screen. 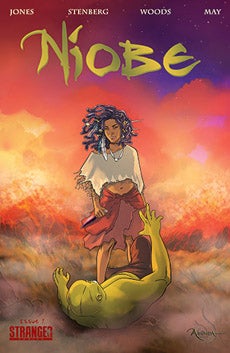