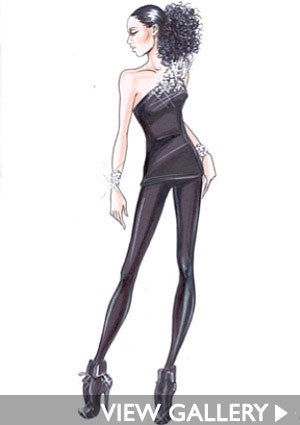 ESSENCE Music Festival headliner Alicia Keys and her favorite designer, Giorgio Armani, are once again collaborating on the Grammy Award-winning singer’s stellar looks. This time, Armani will be designing a custom-made wardrobe for the singer’s European tour, The Element of Freedom, which kicks off in June. Armani has unveiled sketches of four signature looks she’ll don, and there’s lots of sparkle, crystals, beading and sequins to light up the stage! A one-shoulder top with embroidery detail paired with leggings and crystal-studded leather boots, military leather jacket with crocodile print detailing, a dramatic one-shoulder silk chiffon beaded gown in dark gray, and a sexy black viscose lame frock with cascading ruffles are some of the show-stopping stage costumes the iconic designer has whipped up for Keys. This isn’t the first time these two have joined forces. The two became friends back in 2008, when they worked together on Keys’ “As I Am” tour. Keys has since turned to Armani to outfit her in amazing red-carpet looks for such high-profile events as the Grammy Awards, American Music Awards and last year’s Oscar ceremony. We can’t wait to see Keys bring these fantastic sketches to life.