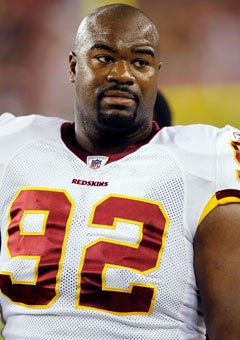 Coaches and teammates of NFL defensive tackle Albert Haynesworth are probably wondering which is worse: his inability to keep his hands to himself or his attempts to clear his name. The 29-year-old Redskins player recently pled not-guilty to sexual abuse charges, after a waitress accused him of fondling her breasts as she carried a tray of drinks.

His response to the allegations? “She’s just upset I have a White girlfriend. I couldn’t tell you the last time I dated a Black girl… I don’t even like Black girls.”

I detailed my own discomfort with brothers who “don’t like Black women” and/or those who choose to seek love outside the race, in the March 2010 issue of Essence (‘If I Were Your Woman’); it’s a complicated feeling and I’m sure Haynesworth has come across many sisters who feel the way I do. Some of us may be hurt, confused or even angry at their choices, but we aren’t running around making erroneous claims of sexual harassment in order to punish those men who “step out.”

This sort of situation is the “case-in-point” for Black women and men who complain about interracial dating. Haynesworth didn’t say he was color-blind or that he simply happened to find a woman who was of another race. He dissed us. He sat in front of a detective with his own mother’s ethnicity written all over his dark brown face and he said that he was incapable of sexually abusing a Black woman not because he respects women too much to do so or because he wouldn’t touch anyone aside from his own partner… but because he doesn’t like Black women.

It’s attitudes like this that create ire in sisters when it comes to Black men who date outside the race. If I were his mother, you’d probably have to check me into an asylum, because I would lose my ever-loving MIND if my Black son told the world that he didn’t like Black women, after being accused of putting his hands on a woman’s breasts without her permission.

But what the pro-baller doesn’t seem to recognize is the fact that sexual harassment and assault is not a gentleman’s way of saying “I like you,” “I respect you” or “You’re my type of girl.” Rather, the implication behind the sort of action Haynesworth has been accused of is that he did NOT like or respect the woman in question; instead, he allegedly treated her like an object existing solely for his gratification or pleasure.

While men of all races routinely sexually assault and harass women who look like those who they would take home to mama, the fact that he “doesn’t like Black women” may make him more inclined to treat one like a piece of meat.

When our ancestors were being raped and harassed by White men, it wasn’t because they liked us. Black women have a long history of abuse at the hands of men who made it quite clear that they didn’t want to marry or date us, but instead, use our bodies for their pleasure. When they were publicly called out by White women or opponents to sexual abuse, many of these men had similar excuses to Haynesworth: they didn’t “like Black women” either. The idea that a Black man from South Carolina would pull that same card in 2011 is pretty despicable.

Black women don’t need Albert Haynesworth to like us; we do, however, deserve his respect. Not only should he (allegedly) learn to ask a woman before he invades her personal space, he should take the time to understand that disliking the women of his own race says a lot more about him than it does about us. A marriage or fling with a White, Asian or Latina woman can yield Haynesworth a Black daughter. (It may have already; in 2010, a Latina exotic dancer from New York filed a suit against him, claiming that he impregnated her, promised to help her with both the emotional and financial duties of the pregnancy and failed to do so. Perhaps he doesn’t “like” Latina women either.) I wonder how he would explain to her what her daddy had to say about his preference in women.