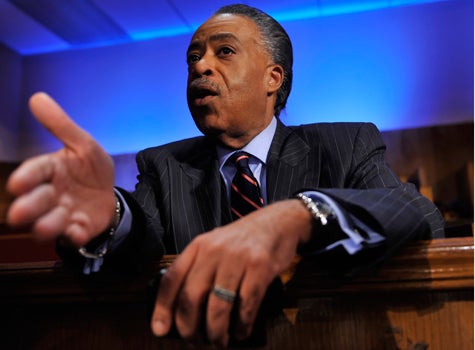 Debate is bubbling these days over plans for an Islamic community center a few blocks away from Ground Zero. But this week another clash is taking place over what’s considered by many to be a different kind of hallowed ground. On August 28… 47 years to the day since Martin Luther King Jr. delivered his “I Have a Dream” speech at the Lincoln Memorial, FOX News personality Glenn Beck is holding a rally at the same spot. Beck insists that his “Restoring Honor” rally, for which Sarah Palin will be a featured speaker, is not political, but will focus on the country’s “values” and pay tribute to military families On the same day, the Reverend Al Sharpton’s National Action Network is holding its own “Reclaim the Dream” rally and march in Washington, starting at a local high school and culminating in a trek to the site of the King memorial on the National Mall. Leaders from a coalition of civil right organizations, including the National Urban league and NAACP, along with U.S. Education Secretary Arne Duncan, will join Sharpton. ESSENCE.com spoke with Sharpton about the purpose of his “Reclaim the Dream” event, the conservative whitewashing of Dr. King’s legacy, and why marching is still relevant.     ESSENCE.com: I understand the “Reclaim the Dream” march is not meant as a protest counter-march to Glenn Becks’ “Restoring Honor” rally. What are your message and goals? REV. AL SHARPTON: Every year we try and do something to remember the dream. Two years ago during the Democratic National Convention, the DNC and NAN had a huge breakfast that the King children and I keynoted. Ironically, it was the same day that Barack Obama accepted the Democratic nomination. Last year we did it in church, and this year I announced at our NAN convention in April that we wanted to go from a school to the site where the King monument will be built. We want to show the problem with education. We had announced this before we ever heard about Glenn Beck’s event.   The purpose is to celebrate, 47 years later, what the March on Washington helped us to get. But we’re not there yet. That dream has not been fulfilled as long as you have Blacks doubly unemployed. As long as you have an education gap. As long as we continue to have criminal justice system problems like racial profiling and police brutality. Our march is to say, we celebrate the past, but we reclaim and recommit ourselves as dreamers of today because we’re not in a society that’s fair and equal. ESSENCE.com: Beck has responded to criticism of his rally by referring to the part of Dr. King’s “I Have a Dream Speech” about judging men by the content of their character. What are your thoughts on this oversimplification of King’s views? SHARPTON: What I think people should do is read Dr. King’s speech. They quote “I Have a Dream,” but read the speech. He said we came because America has given the Black man — or the Negro, he said at that time — a check that has bounced in the bank of justice marked “Insufficient Funds.” He talked about having fairness and equality. If anyone reads that speech they cannot say that what Beck and them are talking about is consistent with what Dr. King said. We can have our own views and opinions of Dr. King, and share them with the world. Beck has the right to hold his march, and I don’t object to that. But we can’t have our own facts.   ESSENCE.com: Beck has said it will not be political, but about “reclaiming values.” What do you think are the chances that this will actually be a non-partisan event? SHARPTON: He’s got politicians speaking like Sarah Palin. Their ideas of “values” is sometimes political. But if they’re having a values march and not dealing with the civil rights and equal rights of American people, then they’re not doing anything like what Dr. King did. You cannot take an anniversary of a civil rights march and turn it into what you want, and act like you’re consistent because somebody was a minister.   ESSENCE.com: How do you respond to people who say that marches serve no real purpose in 2010, and they’re an outdated approach from the 1960s? SHARPTON: Some people in the ’60s were against the march. There has never been a time that everybody agreed with marches. But marching is the way you dramatize and expose problems. Without that, the media, and the government officials that respond to media, would not focus on those issues. By raising these issues with a march on Saturday, then government officials and others will have to talk about how they’re going to deal with unemployment, the gap on education and the criminal justice system. Are we nave enough to think that, if we were not doing an action, they’d be discussing this? That is why immigrants had a big immigration march; that’s why gays and lesbians march. None of them have a problem marching. Everybody in America is marching but Blacks. We are the only ones talking about, “Why are we marching?” It’s crazy to me. We taught the world how to march, and now we act like we shouldn’t march. It’s absurd. For more of Cynthia Gordy‘s Obama Watch stories, click here.