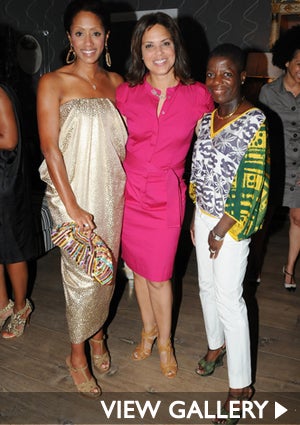 Lifestyle expert Bevy Smith and AMBI hosted a private dinner in honor of CNN anchor Soledad O’Brien’s education foundation, The Soledad O’Brien and Brad Raymond Family Foundation. Activist Malaak Compton Rock, Studio Museum of Harlem director Thelma Golden, educator Steve Perry, actor Anthony Mackie and businesswoman Crystal Anthony-McCrary were a few of the friends who came to share a toast to O’Brien’s efforts. Education is something O’Brien and her husband Brad place at the forefront of their philanthropic work. They started their foundation shortly after hearing of a young Hurricane Katrina survivor who needed help paying for school. “My friend Kim said to me: ‘I have a young woman who needs a scholarship and you need to pay for it,'” says O’Brien. “I told my husband and he said, ‘We should do it. We’ve been talking about giving back.'” Since that conversation, the Raymond-O’Brien family has funded the education of three young women across the country. “I pick people who are sure bets,” says O’Brien, proud of her students. “I come in at the point where they’ve done all these things and I just help them over a rough spot. And we don’t give a lot. I don’t write checks for $100K. I write tiny little checks.” ESSENCE.com also salutes the Soledad O’Brien and Brad Raymond Family Foundation’s commitment to education.
Loading the player...