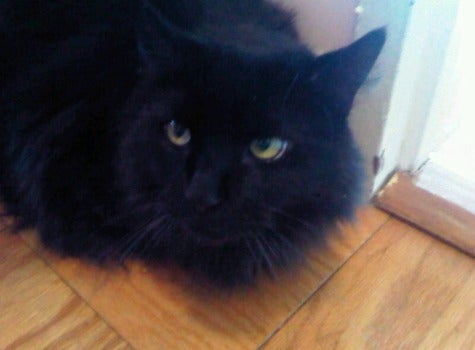 “Smart guys like dumb girls, dumb guys like dumb girls. What do smart girls get? CATS!” or so says Alex Dunphy on ABC’s Modern Family. I have had a cat, with the exception of college, for the last… well, let’s say my high school boyfriend Ronnie gave me my first cat. Between the cat jokes and the lawyer jokes, I have probably heard them all.

Yesterday, while tweeting about the New York snowstorm that really wasn’t, I added a postscript: it was about high time that I called a behavioral specialist in for my cat, and I hoped his office was not closed due to the snow. Before you go there with the cat jokes, no, I am not Cat Lady, I have one cat a time; I am just a single chick who likes having a cat. Boyfriends may come and go, but my cats… well, they have always been my ride-or-die girls.

You may think that a cat is a strange thing to write about in a column, but ask any pet owner, single or not, they will tell you that pets are family. People cut dates short to walk dogs and most pet owners will do anything for their pets. And for me, this “anything” includes pet behavior therapy. After I tweeted that, of course, my girls started in on me on Twitter.

The jokes were led by Bevy, who doesn’t understand the pet/human dynamic, and egged on by Angelique, who frequently catsits for me (thank you, Ms. Miles). I have to admit, maybe it was my tweet about putting the cat in time-out for an hour and her need for behavior therapy that opened up that can of worms. I have no idea, but the jokes were on.

Let me give you a bit of history. I adopted Maya, a black feral kitten, after my 13-year-old cat Sasha died of cancer. Maya slipped out of my house as a kitten one night after I’d returned home, and I didn’t notice until the next morning. When she found her way back, she looked fine, but she had been attacked by another animal. She was so young, I didn’t have pet insurance yet, so one vet visit set me back $1,000 for diagnostic tests and X-rays. It was another $5,000 spent on skin grafts, daily visits to the vet for the entire summer for “rehab,” flying my mom out to cat sit while I went to a friend’s wedding, and several jokes that my poor cat looked like Frankenkitty (okay, she did, but whatever) before Maya was better.

Unfortunately, she is only physically better, although if you look at her from the back, the attack left her with a “derriere” only her mama and her good friends could love. She is a mess, but she is my mess. Maya has always had that feral wild streak, and it was aggravated by the attack. While she’s loving most of the time, she can display a defiant, aggressive side. She is so aggressive with vets since her attack, they have to knock her out (I believe “sedate” is the politically correct term) to perform a routine exam.

It is widely recognized that feral cats have issues, and when I moved to New York City, Maya’s behavior drastically changed. I talked to several vets, and they determined that she has “abandonment issues.” You see, when I lived in L.A., I was home more frequently, so much that I would joke that I would die alone and the cat would eat my face before anyone realized my untimely demise. In New York, I am out much more and I come home much later at night. Maya quickly started expressing her displeasure by leaving presents in the same two places around my apartment.

The other night, I came home after a grueling day at work and three hours of French class and was beyond exhausted. Then I saw Maya’s little gift and lost it. I screamed at her, rubbed her nose in the mess, then banished her to time out. I did everything you are not supposed to do. I quickly felt horrible about my behavior, yet she tries my every nerve. I even threatened to give her to a no-kill shelter on Facebook a few weeks ago. Of course, I never would, but what is a girl to do?

Since she is traumatized by traditional vets, that is out of the question. But I believe in therapy and alternative medicine, so I figured what’s good for the goose is good for the cat. I’ve had the cat therapist’s number for some time and fortunately he was not on a snow day. We did a phone consult, and he recommended… music therapy to soothe her and a round of Prozac. He also suggested a Reiki therapist, similar to a cat whisperer. I laughed because, of course, my cat would need therapy, I’m a sucker for a sob story.

I called my mom, who offered to make a DVD of my photos so I could loop it on my TV to keep her company. I suspect Maya is too sharp to fall for the banana in the tailpipe; no way will she believe that those photos equate to my presence, but I’m willing to try anything. And yes, in this instance, anything means DVDs, Prozac and Reiki. If you’re an animal owner, I suspect you would too.