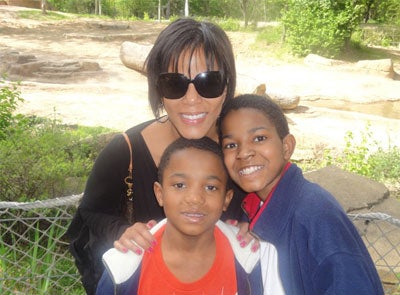 Mother’s Day holds a special place in my heart, just as I am sure it does for most people. I go back to St. Louis several times a year to visit with my family, and Mother’s Day is one of those special days I try not to miss.

I have a very close relationship with my mother; she inspires me, and is such a role model. We have a typical mother-daughter relationship. Sure, I love and admire her, yet I seek her advice almost as frequently as I dismiss it. But just when I think I have firm grasp on life’s mysteries and challenges, something unfolds and I am reminded of her mother-love and wisdom. I got a first hand reminder of that again this weekend.

I am filled up with love from the kids in my life: I have 3 nephews, a younger cousin and several godchildren who constantly bless me with their affection. While I do not profess to be a mother, I do know that you don’t have to have a biological bond with a child to experience that reciprocal unconditional love of a child… nor the pain… nor the guilt that comes along with mothering.

If I am in St. Louis, my nephews and I are spending the entire time together. It was a lovely Saturday and I wanted to spend it outdoors. I told my nephews to choose our outdoor activity and they chose the zoo. Eric and Grant, the two oldest, were game. They hopped in the car, endlessly talking about the animals they’d seen on their last trip. Jason, 7, the youngest, reluctantly came along. He didn’t say a word the entire car ride. Jason was not his usual happy self, but sullen, pouty and bossy. “Oh Lord help me,” I silently said; it was going to be a long day!

We made our way through nearly every exhibit and cage at the zoo. Jason said about three words the entire time other than “Let’s Go,” which he repeated at every stop. He was trying my last nerve! Finally after three hours in the heat, we left and headed out for an early dinner. Nothing really changed as Jason continued to antagonize his brothers over dinner and he wouldn’t listen to anything I said.

At one point, he took a jab at his brother’s arm and I told him to apologize. “NOPE!” he declared. “What?” I asked, and gave him “The Eye,” which usually gets him, but he became more defiant instead. He was definitely on one.

After we got in the car, I’d had enough and I told him I was taking him home to his mother’s house. Right then and there, he lost it! He was crying and screaming, sobbing crocodile tears in the back seat of the car. I have never seen this from him; this is the kid is who is consistently affectionate, never gives me any trouble, shops with me and literally tries to stow away in my suitcase so he can come back to New York with me. But who was THIS kid? Whoever it was, he was defiant and recalcitrant; a shadow of his former self.

I felt bad as my nephew was hysterically crying, but his behavior had been awful. I was conflicted but what was I to do? His mother wasn’t home, so we continued to my mom’s house, but the tears didn’t stop. Twenty minutes later, he was still sobbing loudly and nonstop. Then he got me, “I was just trying to have some fun Aunt Lisa, I was only trying to have fun!” he repeatedly said between screams and tears.

I stifled my laugh, because I know that old routine, but he had to know that what he did was wrong. “Okay, then go in your room for a few minutes and calm down,” I said, trying to stroke his back. He did anything but. He dragged himself to his room, pitifully laid himself down on his bed, then cried and screamed nonstop for the next 30 minutes. Nothing anyone tried would make him stop. I felt like the worst person EVER! All this and I’d only taken his toy and tried to drop him off at his mother’s. He wrecked my nerves and was completely out of line but wanted his d#@& toy back. And there I stood. This 7-year-old made me feel like I was only missing my broom and witch hat; the evil, spinster aunt rears her ugly head. Oh boy.

About an hour after the histrionics started, he came to apologize as I was about to go out. We talked, exchanged hugs and kisses and my heart melted all over again. He scurried off, but I still felt like crap; I was sure that I’d scarred this kid for life.

I called my mother once I got to my cousin’s house and told her about my guilt. She explained things I already knew, but something about the “motherspeak” comforted me. Finally she said, “Now you see how mothers feel when we have to discipline our kids.” Just that simply, she’d talked me off my ledge; the lightbulb went off and she connected my dots. I thought about all that tough love she doled out between her mommy-love moments, and I felt relieved and uplifted. Sure, I knew this, but she made me understand what happened was okay.

It’s extraordinary moments like that as well as the ordinary ones when I revel in the blessings of  having a mother who loves and uplifts me. A mother encompasses so many meanings, but at that moment, she embodied the very definition of a mother: one who is always there when you need her. I mentally replaced my broom with my Super Aunt badge again, knowing that all was okay between Jason and myself; and it was.